Regardless of the situation, we always want to strive to land the best number possible when placing a bet. Whether that's on a side, total, or player prop, the long-term +EV approach is to beat the closing line. When it comes to betting team win totals, the best approach is to get in as early as possible before the market dictates if the number needs to be sharpened or not. With that caveat in place, if you're betting the Buccaneers over at 9.5, you are not getting the best of the number. You're also not getting the worst number, either.

Before free agency kicked off, the Buccaneers opened at 7.5 wins, and then Tom Brady happened. Tampa Bay's win total took off immediately, peaking at 10 wins, but the reverberations from that meteoric rise have brought the number back down to 9.5 at most books. Using lookahead lines, the Buccaneers are favored in 14 of their 16 matchups, the lone exceptions being Week 1 against the Saints, and Week 12 when they host the defending Super Bowl champion, Chiefs. Just like my podcast partner Connor Allen did in his piece about the New York Giants, I've translated each spread to an implied win percentage and then calculated how many games the Buccaneers would win if they played each game 1000 times. Using this method and lookahead lines, their expected win total is 9.395, right in line with the market.

The massive outlier that I don't believe is being properly accounted for here is turnovers. Last season, the Buccaneers finished with a -13 turnover margin, despite being +7 in the highest variable turnover metric, fumble recoveries. Amazingly, they were +9 in point differential on the season, something that's hard to do when losing the turnover battle that badly. Our 4for4 projections have Tom Brady throwing 9.5 interceptions this season on 591 attempts, an INT% of 1.6%, in line with his career mark of 1.8%. As we know, Jameis Winston created a new club last season, becoming the first-ever 30/30 QB, throwing for both 30 touchdowns and 30 interceptions in a season. Winston's 30-interception season likely ends up as a career outlier for him, but last season's 4.8% interception rate is not drastically out of line with his 3.5% career mark. The question to solve for here is, how do we quantify the anticipated drop in turnovers?

Years ago, in the book 'Hidden Game of Football', authors Pete Palmer and Bob Carroll unpacked this question, and Football Outsiders' Aaron Schatz did a deep-dive of his own on their findings. The research is rather old, but I can't imagine that the impact is much different today than it was when first discovered. Here are some of Schatz's main takeaways:

"As for the value of a turnover, giving the ball up is worth about 3.8 points in the middle of the field, about 4 points at the 20-yard lines, and 4.25 points at the goal-line. If you want to get technical, it's worth more on first down than second down, and more on second down than third down." 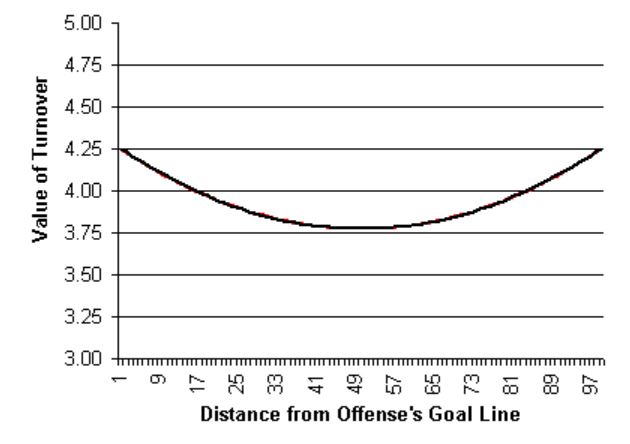 The major variable is that field position is fluid, and that fluidity impacts the value of each turnover. On average, a turnover is worth 4 points, assuming that it takes place in the middle of the field and that the ball isn't advanced by the defense. Let's take a look at the impact of last season's disastrous 30 interception season:

How do we project this out for 2020? Let's play around with our 4for4 projections and a few range of outcomes:

For the sake of the exercise, I need your grace in estimating 2020 fumbles. Last season, the league average number of fumbles lost and recovered was nine, so that's the origin of the '9' used above. Remember, despite all of last season's turnovers, the Buccaneers still ended the season with a net-positive point differential.

I believe the demise of Tom Brady has been greatly exaggerated. He struggled mightily at times in 2019, losing his starting center just before the start of the season, and never playing behind the same offensive line for more than five straight weeks due to injury. Antonio Brown left town just as quickly as he rolled in, and the turbulent Josh Gordon era came to a dramatic end mid-season as well. Brady wasn't good enough to survive the surrounding cast of characters left behind.

I do find it noteworthy that the supposedly 'washed' Tom Brady, not known for his deep ball accuracy over the past decade, was more accurate on throws of 21-plus air yards past the line of scrimmage than Jaimes Winston last year (46%-44%). Yes, the attempt numbers look very different, but I believe that's more indicative of play-calling and support cast talent than it is of quarterback skill. Head coach Bruce Arians has made it clear that the playbook will be a collaborative effort moving, ensuring that they're setting their soon-to-be 43-year-old quarterback up for success.

Outside of the change at quarterback, the Buccaneers had a strong offseason. They were able to address their offensive line needs in the draft, selecting Iowa's Tristan Wirfs in the first round. The also landed S Antonio Winfield and RB Ke'Shawn Vaughn, both of whom will be expected to contribute from day one. They also added a tight end via trade with New England, but his name escapes me right now. As mentioned previously, this defense is for real. The front seven is one of the best units in the league, and will benefit from more advantageous starting field position due to the decrease in turnover rate.

The schedule makers were very kind to Brady and company, as well. Their schedule is the 11th-easiest based on Vegas forecasted win totals, by far the lightest in the NFC South. They'll spend nearly all of November and December in either a dome or in sunny Tampa Bay, avoiding the cold and potential for snow almost entirely. After a Week 13 bye, the Buccaneers face Minnesota at home, Detroit on the road, and the Falcons twice. Not exactly a murder's row. I know it's not the best of the number, but I'm buying the Buccaneers' over at 9.5.

Note: All advice in this article is based on odds available on the date of publishing.

Ryan Noonan utilizes analytics in his free time, that's how data-obsessed he is. He's been leaving draft rooms with the best team on paper since 1998, and his knowledge of football has helped him to leverage sportsbooks, fantasy leagues, and DFS ever since. He hit over 65% of his picks in his 2018 and 2019 NFL Totals, and he's always looking for a teaser to chase. Mainly a cash player in DFS, Noonan loves applying that process to the player prop market as well. He is the host of Move The Line NFL podcast. You can find more of him @RyNoonan on Twitter.