This is a particularly good year for wide receiver breakouts, or sleepers if you will. I define sleepers as players who are likely undervalued at their present average draft position (ADP). Below are three I think have a good shot to return value this season. One, profiled first, I believe can be a league-winning player.

All route data is courtesy of Sports Info Solutions.

These are the grievances against Jordy Nelson, and you'll hear them quite often in the fantasy community. They are ill-founded in my view, and there is good evidence to support this assertion. Let’s take each in turn.

Last season not only was Nelson saddled with the loss of the best QB in football in Aaron Rodgers, but Rodgers’ replacement was one of the very worst backups in the NFL, outside of Cleveland. Yet, despite this adversity, Nelson caught a preposterous six touchdowns and managed to earn 88 targets for 482 yards. These are not great numbers, aside from the TD Rate, but it's crucial to remember that just two short years ago Jordy was the WR2 in PPR. That's not a WR2, i.e. a top-24 receiver. He was the second-best player at his position in fantasy.

One of the fascinating things that folks who've looked at age curves in the NFL have found is that the curves are flat. Players who play into their thirties do so because they are good, and their decline is so gradual it’s nearly imperceptible. Instead of a slow walk into the sunset, for receivers and running backs, it’s a quick professional death. The best analogy for an NFL career is a mortality table: You’re good until you aren’t and then you are gone. There is no in-between. Because of this, a well-calibrated and validated predictive model will not punish players who age. The very fact that they are still in the league in their thirties means they are very good! In short, Jordy’s age shouldn’t be used against him in a vacuum. It needs to be accompanied by another leading indicator of decline, like speed. This brings us to point three.

3. Jordy Has Lost a Step

We’re fortunate to have access to NFL NextGen speed and distance traveled data from the past two years so that we can answer this question empirically. Between 2016, when Nelson was the penultimate WR scorer in all of fantasy, and 2017, Jordy’s game speed didn’t slow in any appreciable way. 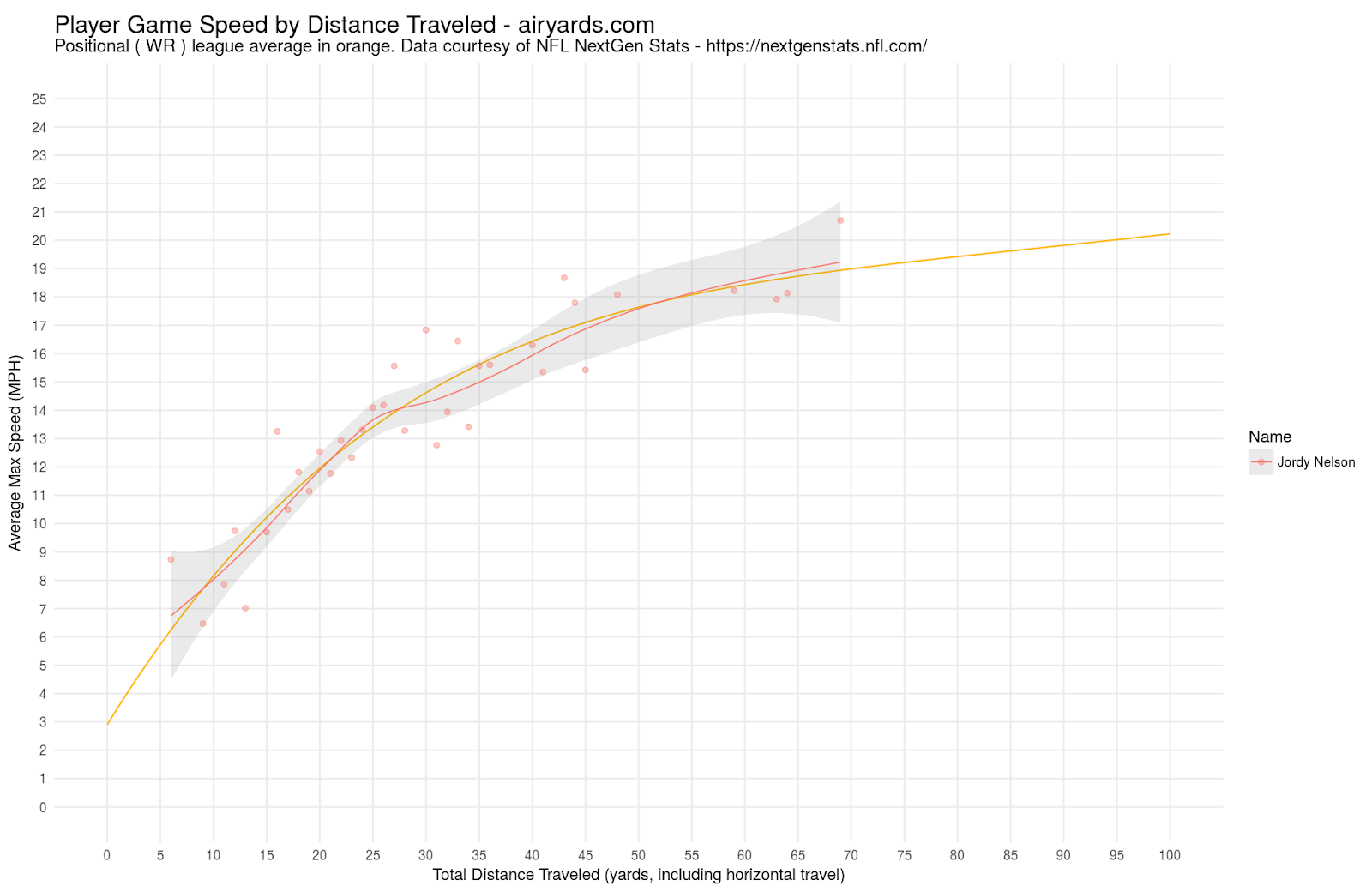 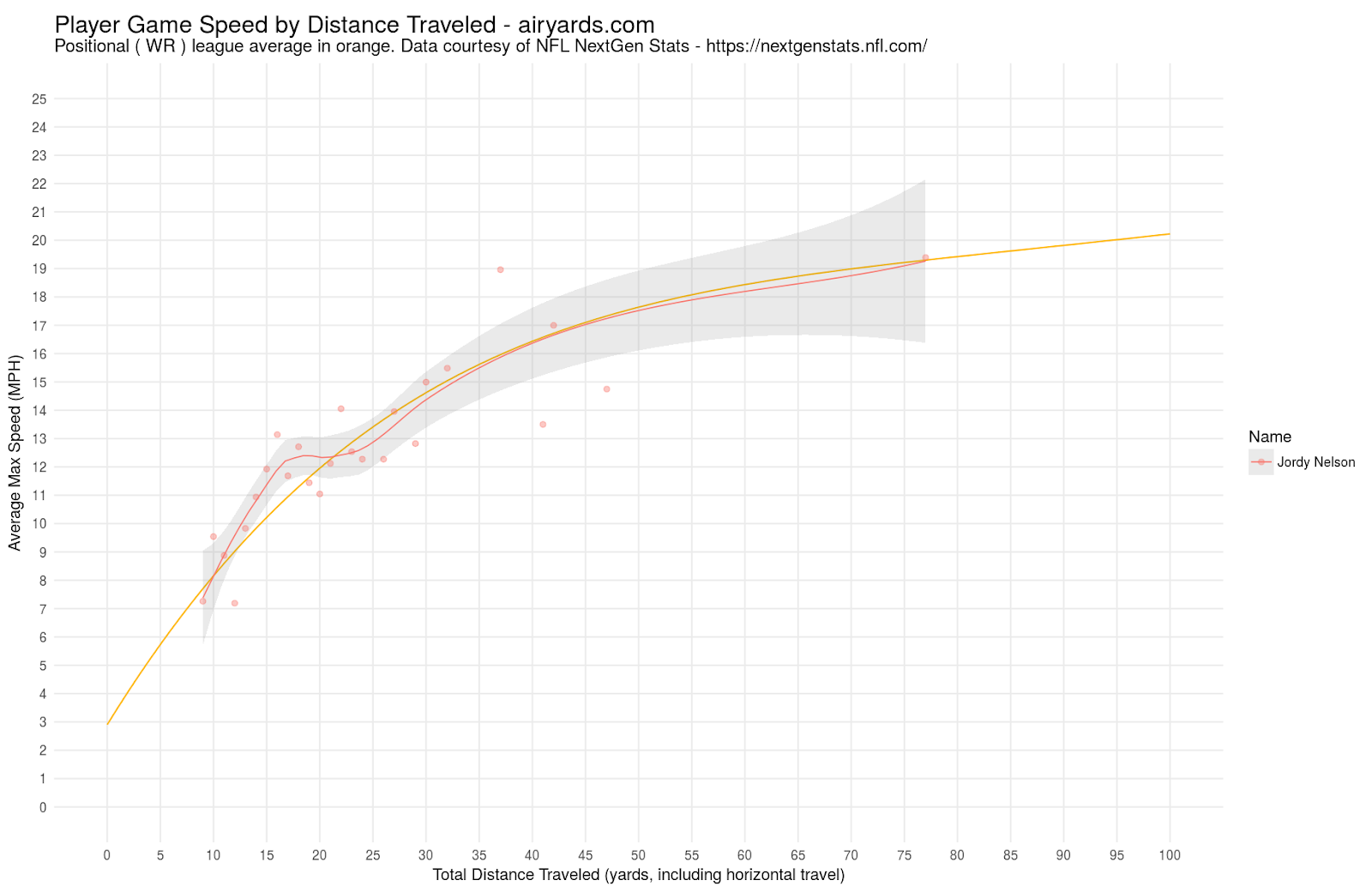 Recently Jon Gruden appeared on the NFL Network and reported that Nelson was measured at 22 MPH in practice. It's quite clear that Nelson is the same player he always was in terms of game speed.

Amari Cooper was not able to supplant Michael Crabtree as the top receiver on the Raiders when the two played together. Since it's clear Nelson hasn’t lost a step, there is a very real possibility he ends the season as the No. 1 receiver on the Raiders. Meanwhile, players who are the third option on their teams like Sammy Watkins are being drafted ahead of him. The market is irrational in this case, and at an ADP of WR42, my strong recommendation is to buy all you can of Jordy Nelson in 2018.

Continue reading to see why Emmanuel Sanders is primed for a breakout campaign in 2018, as well as two more wide receivers Josh is targeting in fantasy drafts...

More from Josh Hermsmeyer
Most Popular