Analyzing last week's results is one of the best investments of time you can make as a DFS player. Here I analyze winning lineups, low-owned players, and other notable Week 5 takeaways that can be used to gain an edge going forward. 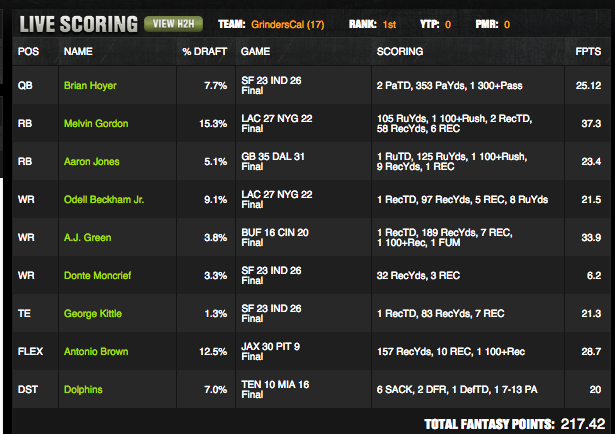 Congratulations to someone I've had the pleasure of meeting a few times, Cal Spears (GrindersCal), for winning the Week 5 Milli Maker. Cal took down the grand prize with some sharp decisions. While the majority of the field paid up at RB, Cal jammed in Antonio Brown, Odell Beckham, and A.J. Green, who all came through with at least 20 points. While LeVeon Bell was chalk because the Jaguars defense had been strong versus the pass and weak versus the run, Brown showed that any perceived tough matchup can be overcome with sheer volume; Brown caught only 53% of his targets, but had a whopping 19 targets and was able to produce 159 yards on the day on the heels of a 49-yard gain on the offense’s first play.

Cal supported his core of stud wideouts with a moderately priced backfield of Melvin Gordon and Aaron Jones. Best of all, while everyone else was freaking out because Marquise Goodwin being active meant Aldrick Robinson was no longer a good value, Cal locked in Hoyer’s tight end, George Kittle, at a similar price to what Hoyer-Aldrick would have costed. Although he didn’t end up needing to hit on Donte Moncrief to win, the thinking was good there, too, as he was attempting to leverage the correlations between members of opposing passing games.

If you were one of the 92.3% who didn’t own QB Brian Hoyer, how could you have landed on him?

Hoyer was recommended by both TJ Hernandez and I in our respective slate breakdown articles. TJ noted the Colts were allowing the third-most yards per pass attempt and ranked 27th in QB aFPA. I noted Hoyer posted over 20 points against the only other defense he faced ranked below 20th (Rams, 23rd), and also noted that if Hoyer eclipsed 20 points, he would have a reasonable shot at outscoring other popular plays in his salary range, providing a path of lesser resistance to winning a tournament via differentiated lineup construction.

If you were one of the 94.9% who didn’t own RB Aaron Jones, how could you have landed on him?