Analyzing last week's results is one of the best investments of time you can make as a DFS player. Here I analyze winning lineups, low-owned players, and other notable Week 3 takeaways that can be used to gain an edge going forward. 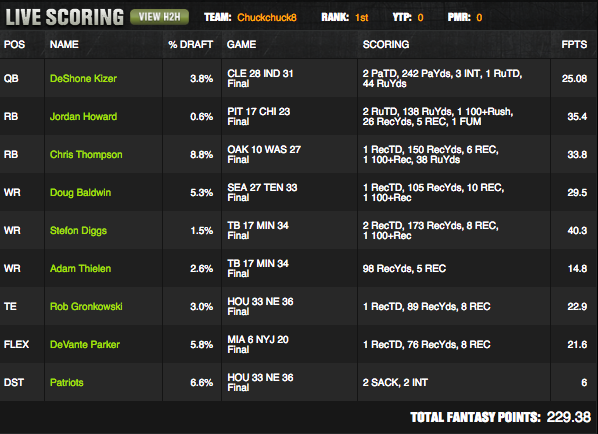 Chuckchuck8 used a truly contrarian lineup to take down the grand prize. He used DeShone Kizer without chalk receiver Rashard Higgins, and Rob Gronkowski without stacking him with Tom Brady. He also stacked both Vikings WRs without Case Keenum, and decided not to pay up at RB. The lineup is an example of how differentiated roster construction can give you a huge edge if it hits; because of how unique the lineup was, it didn’t even matter Adam Thielen and the Patriots DST didn’t post difference-making performances.

If you were among the 99.4% who did not own RB Jordan Howard, how could you have landed on him?

Valid injury concerns contributed to Howard’s low ownership, but he was at home and was considered a top-10 RB by preseason ADP. Howard also had the fourth-highest GPP Leverage Score among RBs and the second-highest among RBs under $5,000.

If you were among the 98.5% who did not own WR Stefon Diggs, how could you have landed on him?

Diggs had another week to work on his chemistry with Case Keenum and was facing a Bucs defense missing pieces at every level, including top cornerback Brent Grimes. Diggs had the highest GPP Leverage Score among WRs in the $6,000–$6,900 range.

If you were among the 97.0% who did not own TE Rob Gronkowski, how could you have landed on him?

Always the favorite to be the week’s highest-scoring TE, Gronk had the highest projected ceiling and the highest GPP Leverage Score among TEs above $3,000.

If you were among the 96.2% who did not own QB DeShone Kizer, how could you have landed on him?

Kizer was our top QB by Value and TJ Hernandez even deemed him viable in cash games against a lackluster Colts defense still missing top cornerback Vontae Davis.

If you were among the 94.7% who did not own WR Doug Baldwin, how could you have landed on him?

Baldwin was tied for the highest GPP odds among WRs under $7,000, and Seattle’s underdog game script meant passing in catch-up mode was a possibility.