Analyzing the prior week's results is one of the most valuable investments of your time as a DFS player. In this space, I will deconstruct the Week 18 winning lineups from FanDuel and DraftKings' biggest GPPs. I will also highlight other key takeaways from the past week's games and/or the season to date. 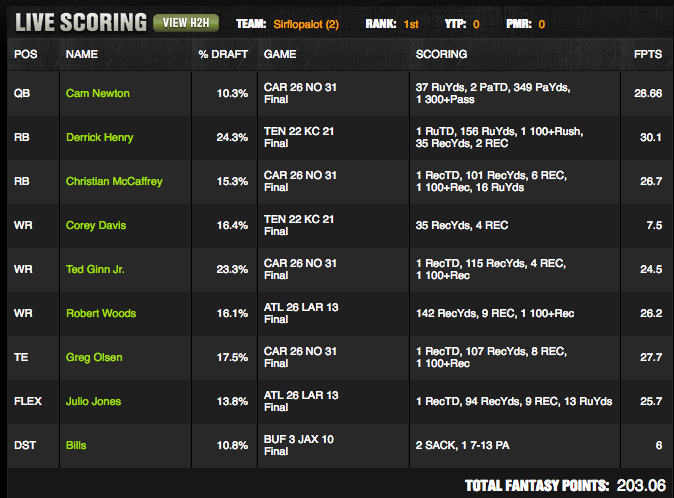 One of the most beneficial aspects of the plus/minus-based value metric we implemented this season is the way it puts roster construction decisions into context. For instance, while Derrick Henry’s projected value ranked eighth among RBs, it also ranked ninth among all players on the slate, with Michael Thomas being the only player at another position projected as more valuable than Henry. In the context of aiming to maximize your lineup’s ceiling, rostering the cheapest player that is still projected for more value than pretty much everyone at every other position makes a lot of sense. Stepping back from projections, Henry had enough going for him to offset the risks that come with road underdog status, namely 29 touches in the absence of DeMarco Murray the week before (this is the part where I remind you that volume is the foremost concern for a DFS RB), and a matchup against a Chiefs run defense that finished the regular season ranked last in DVOA.

At $6,400, Christian McCaffrey’s appeal was similar to Henry. With Devin Funchess slated to contend with defensive rookie of the year candidate Marshon Lattimore, McCaffrey and Greg Olsen were the most likely Panthers receivers to produce above expectation. Speaking of expectations, Cam Newton was left out of nine of every 10 lineups despite leading all QBs in our GPP odds model by three percentage points. Recency bias stemming from a 14-of-34, three-interception, classic “bad Cam” outing in Week 17 probably had a lot to do with his low ownership. Recency bias most likely had something to do with Olsen’s relatively low ownership as well, though salary came into play as well; as the most expensive TE not named Travis Kelce, Olsen was in a salary purgatory of sorts. Olsen ended up with lower ownership than not only Kelce, but also Delanie Walker, Charles Clay, and even Austin Hooper. Nevertheless, in last week’s DraftKings slate breakdown, I noted Olsen was my favorite GPP play at the position, mainly due to his somewhat under the radar high-level usage over the final three weeks of the season, including a team-leading 27 targets and 37% air yard share.

In the aforementioned slate breakdown, I also noted Ted Ginn was my favorite GPP play at WR. The thinking was simple: the Panthers were allowing the most schedule-adjusted fantasy points in the league to WRs, and while Ginn’s 26% air yard share trailed Thomas’ 42%, no one else on the team commanded more than 10%. Ginn corralled a Drew Brees spiral that traveled over 40 yards in the air and took it home for an 80-yard TD, allowing him to come within 16 receiving yards of Thomas while being the only of the two to reach the end zone.

Julio Jones and Robert Woods exemplified the positive correlation between opposing No. 1 wide receivers. Jones’ GPP odds weren’t as high as Michael Thomas’—who Jones was essentially a direct pivot off of at $200 more—but Jones still had the second-highest GPP odds of any WR on the slate. At fourth among WRs, Woods’ GPP odds were in line with his salary. His team-leading 9 catches and 142 receiving yards should have come as no surprise after he led the Rams in share of air yards (28%) and share of overall targets (22%) in the games he was active.

Corey Davis and the Bills were the lineup filler that made it all work. Rostering a WR, who during the regular season went scoreless on 65 targets while averaging a paltry 5.8 yards per target isn’t for the faint of heart, but I did note in the slate breakdown he had gotten a larger share of air yards and targets than Tennessee’s theoretical No. 1 wideout, Rishard Matthews, over the last four weeks. With six DraftKings points, the Bills weren’t even the highest-scoring underdog DST (the Falcons scored 11), but they were the most easily identifiable underdog DST to target beforehand, as the Jaguars’ implied team total was the lowest of the four favorites, and their quarterback is named Blake Bortles. Despite making numerous big plays with his legs and throwing what would prove to be the game-winning TD, Bortles kept the Bills DST afloat with constant misfires on third down, enabling the Buffalo DST to achieve a four-point bonus for allowing only 10 points.

Tournaments
The Top DFS Stacks on FanDuel and DraftKings: Divisional Round Edition