Here are the two main issues with using points per dollar to determine/compare player value:

That's why we've devised a Value metric for comparing player values in DFS that 4for4 relies on.

1. Using the New Value Metric to Better Compare Players at the Same Position

Saquon Barkley and Christian McCaffrey are almost always top plays every week. But on DraftKings, for example, they're usually priced so high that they're never the top projected point per dollar—or, in our case, points per $1,000—plays at their position. For example, despite being projected for the two highest point totals among RBs on DraftKings in Week 1, Barkley and McCaffrey rank just 12th and 14th, respectively, in points per dollar: 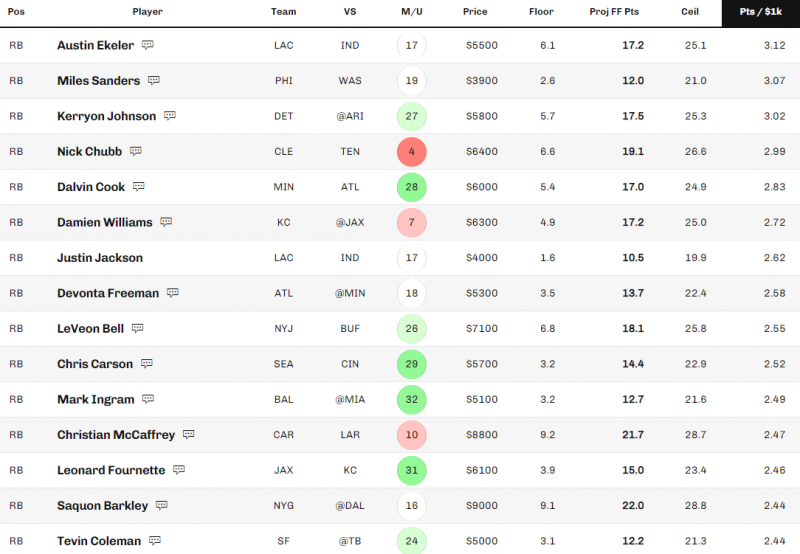 But that doesn't mean Barkley and McCaffrey aren't better plays than Sanders.

Points per dollar fails to measure points above/below expectation, which is what we're really looking for most of the time when comparing players. We're trying to maximize total points, not points per dollar. For example, as good as Sanders's points per dollar projection is, nine Miles Sanders would equal only 108 projected points—more than 30 points lower than the actual projected optimal lineup.

This new Value metric is especially useful when you want to compare the trade-off between rostering two players at very different price points who play the same position, as we've just illustrated. 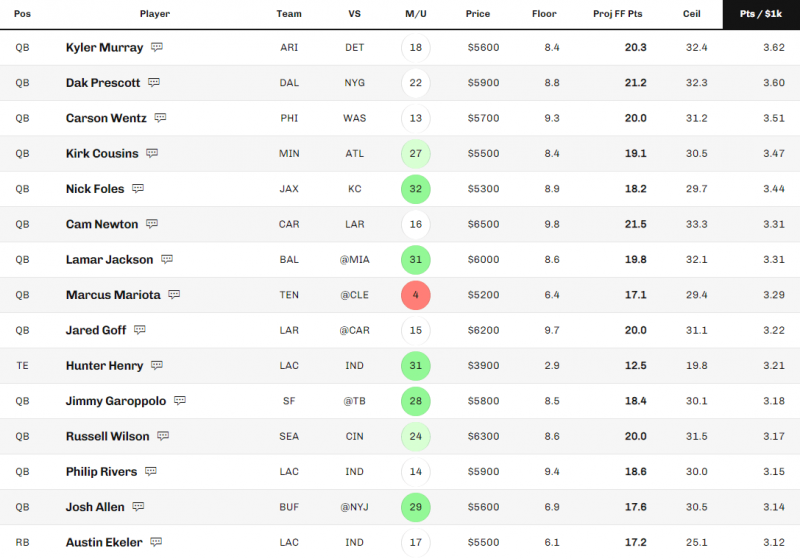 The high number of QBs in the top 15 illuminates the fact that there is a surplus of options at the position, but do little in the way of helping us compare player values, especially that of QBs to non-QBs.

Again, the new Value metric is able to correct this issue. Based on historical data, the Value formula applies a higher baseline expectation for each QB. What results is a more realistic picture of who the top plays on the slate are: 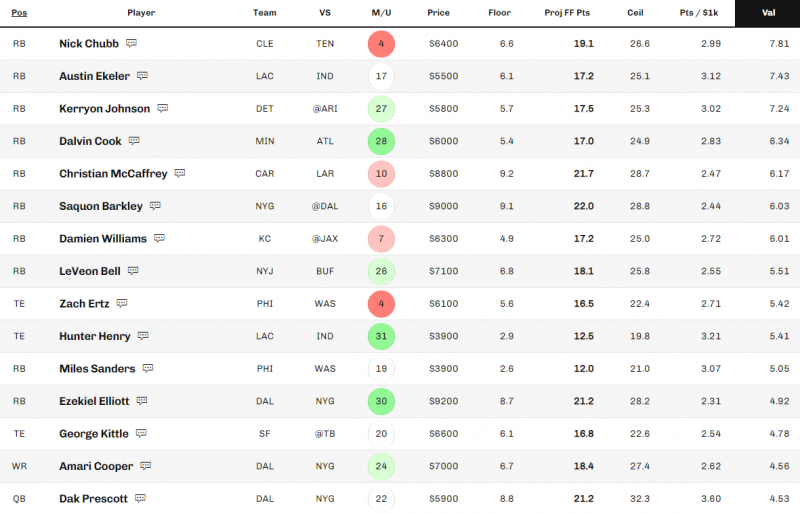 Only one QB cracked the top 15, which is generally how it should be because there will be a myriad of options in a given week; the QB position is more replaceable than others.

Does this change the way lineups are generated in the Lineup Generator?

No. The new Value metric reflects the logic the Lineup Generator has always used to generate the most optimal lineups, and will allow for a quick and seamless manual comparison of players at different positions that previously could only be done using the power of the Lineup Generator.

Does this work with floor/ceiling projections?

Yes. As with standard median projections, the baseline expectation is subtracted from the floor/ceiling projection to calculate Value.

Why are some values negative?

Should this always be used instead of points per dollar or points/$1k?

Yes. As detailed above, it is a more accurate way to compare the value of players.