Raybon's Review: What We Learned From Wild Card Round DFS on FanDuel & DraftKings

Analyzing the prior week's results is one of the most valuable investments of your time as a DFS player. In this space, I will deconstruct the winning lineups from FanDuel and DraftKings' biggest GPPs. In this week's intro, I will discuss how defying logic can lead to better investment -- or in our case, DFS -- decisions This discussion will take the place of the "Quick Hitters" section which normally appears at the end.

Adam Robinson, co-founder of The Princeton Review and the trusted outside global macro advisor to the heads of some of the world's largest hedge funds, stated a theory on episode 210 of The Tim Ferriss Show that really resonated with me. I believe we can apply his theory to our tournament lineup building strategies. (Quote starts at 29:15 and has been lightly edited for clarity):

Before the Wild Card round started, what if I told you that:

And that's the point.

In the aftermath of Cobb going nuclear, I saw some analysts claim that rostering Cobb would have been "bad process", especially since we didn't know Jordy would get hurt.

But you win tournaments by capitalizing off things that are not likely to happen, yet happen anyway.

No matter what process you follow, you'll be wrong a fair amount -- the majority of entrants don't cash in a tournaments, after all. The difference is, when you're right about plays that didn't make sense according to the traditional process of the masses, you have much more upside because the players in your lineup are not going to be on many other rosters.

I've found that the best way to put this theory into practice is to allow yourself to play a player as long as you can identify just a single reason why he's a candidate for a big game. This as opposed to weighing the pros and cons and letting logic inevitably deter you like it will do for the masses.

With that in mind, here are some reasons that could have gotten you on the three players I mentioned above. Note that I didn't include "low-owned player that will play a decent amount of snaps," which can be a good reason in itself, especially on a small slate. Remember, you would have only needed one of these reasons per player.

One final thing I want to point out about each of these players: they were all on the low end of the salary spectrum. Taking risks with small amounts of salary is a high-upside move where the reward tends to outweigh the risk. 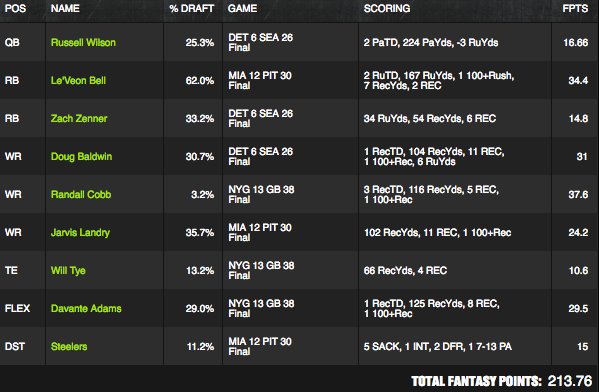