A valid argument can be made that it's a player's game, and coaches don't affect stats. Sure, some teams will improve statistically under a new hire, but that's because coaching turnover happens more on bad teams, and bad teams tend to naturally regress to the mean the next season regardless. To date, attempts to quantify the impact of coaching have been based on questionable science that has thus far missed the mark.

Most coaching analysis, however, focuses on a given team's performance, not tendencies. But those tendencies, specifically in regards to play calling and player usage, are just as critical in fantasy.

Why Coaching is Important in Fantasy

The real key to being good at fantasy football is being able to forecast player volume, not player efficiency.

Your running backs need touches. Who controls how many touches they get?

Your wide receivers and tight ends need targets. Sure, the quarterback ultimately makes the final decision of who to throw to, but who dictates his progressions, and which receivers are on the field and which routes they run?

And your players all need touchdowns. Who decides what plays their teams will run in the red zone?

What Exactly Do We Need to Know About Coaches?

We don't need to isolate the effects of coaching on team performance.

We just need to know the effects of coaching on team tendencies.

You can be reasonably certain that the coach has a substantial level of control over his team's on-field tendencies—even if those tendencies tend to vary over time.

So we'll tackle the coaching issue from a different angle: by examining how a coaching change (or lack thereof) affects the predictiveness of team tendencies from one year to the next.

It boils down to two distinct questions:

The Key Coaching Tendencies for a Fantasy Owner to Know

Based on the previously discussed importance of volume, here are the tendencies we'll examine:

All tendencies have been adjusted to reflect the league average.

Keep in mind that none of these are immune to personnel, game situation, strength of schedule, etc., and that's perfectly fine—every stat we deal with in fantasy football will contain noise. We just want to get a sense of what to make of a team's tendencies given the presence or absence of a coaching change.

What Happens When a Team Changes its Playcaller?

Here is a comparison of the year-to-year correlation in tendencies for teams who retained2 their playcaller versus those who changed playcaller, along with the absolute difference3 between the two sets of correlations. All results were significant at the 95% confidence interval. 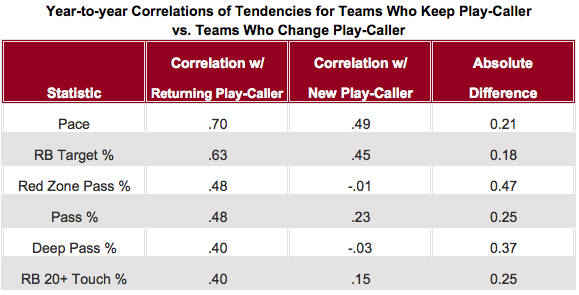 As you might have guessed, you can expect a team to have tendencies similar to the prior year if it brings back the same playcaller. This actually encompasses the majority of teams—it's seldom that more than a third or so of the league changes playcallers in a given year. Already, we have a starting point for projecting tendencies of the majority of NFL teams.

When a given team changes its playcaller, however, that team becomes a lot harder to predict. None of the year-to-year relationships are as strong, and only pace and running back target percentage have anything more than a weak correlation. The previous year's passing tendencies mean next to nothing.

So now we know that a team's tendencies are somewhat predictable from year to year...as long as that team hasn't changed its playcaller.

But if we can't use last year's stats as reliable predictors when a team hires someone new to call plays, where do we pivot?

The logical answer is to go ahead and look at the new hire's tendencies from his previous team (assuming he's had prior play-calling experience). But is that logic backed up by the data? Let's find out.

Do a Playcaller's Tendencies Carry Over When He Changes Teams?

You should note that this time, we aren't strictly using consecutive year comparisons -- many times, more than one year will have elapsed between coaching jobs.

Also note that this sample4 will naturally be smaller than the one from the previous section, because that one consisted of all teams with new hires, rather than just those with new hires who have previous experience calling plays at the NFL level.

How often a new playcaller chose to pass in the red zone with his previous team was the only tendency with any predictive value. In fact, you're better off just looking the team's tendencies from the previous season if you're trying to predict a team with a new playcaller's pace (r = .58) or how often it will target running backs (r = .36).

Why is the red zone the exception? It's hard to tell exactly, but it's definitely possible that certain personnel limitations -- a quarterback with a weak arm, a receiver lacking deep speed, etc. -- are not as prohibitive from a play-calling standpoint in the red zone, allowing a playcaller to stay truer to what he wants to do.

The Truth About Coaching Tendencies

Based on the data, it's likely that what we think of as coaching tendencies might actually just be the coach responding to changes in personnel.

If playcallers truly had unbending tendencies, there would be more of a relationship between what a new hire does with his new team and what he did with his previous team. Instead, playcallers were only predictable from one year to the next when they stayed with the same team—in other words, when they coached a majority of the same personnel in both years (a safe assumption, given that the average roster turnover in the NFL is roughly 30 percent and tops out around 45 percent).

When you take personnel into account, it's much easier to make an educated assessment of when a coach's tendencies will actually carry over. For instance, you wouldn't be surprised to know that Greg Roman's passing tendencies with Buffalo mimicked those from his days in San Francisco—both teams had a young, mobile quarterback and a good defense. Roman's rushing tendencies deviated, however—LeSean McCoy has different strengths than Frank Gore.

Personnel also remains largely the same in the case of an in-house hire5, so tendencies are likely to be more strongly correlated in that scenario than in one which the new hire comes from outside the organization.

While we examined six tendencies that are no doubt crucial, there are, of course, many more specific coaching idiosyncrasies we didn't measure, but which could potentially have a fantasy impact. For example, we didn't break wide receiver target percentage down by WR1, WR2, etc. (because that's largly dependent on personnel), but there are cases like Kyle Shanahan, who's targeted his WR2 less than average regardless of how good his WR1 is.

So to be clear, I'm not suggesting that a playcaller's tendencies will never carry over when he changes teams, just that what a playcaller has done in the past and what he will do in the future should be viewed in the context of the personnel at his disposal.

I'll be applying this analysis to every NFL playcaller to create a comprehensive guide of key tendencies to know for 2016.

I'll also be applying the same methodology to defensive coordinators, and will provide a comprehensive guide of key tendencies for them as well.

2. No partial coaching seasons were included in the sample.

3. We give absolute difference instead of real difference because in this instance we're interested in comparing the strength of the correlations (not the direction).

4. To determine who a team's primary playcaller was, I pored over numerous articles written journalists who cover the team, and in some cases, in-game footage and commentary. In any case where I could not confirm a team's playcaller, I omitted it from the sample.

5. Our sample of in-house hires was too small to produce any results of significance.