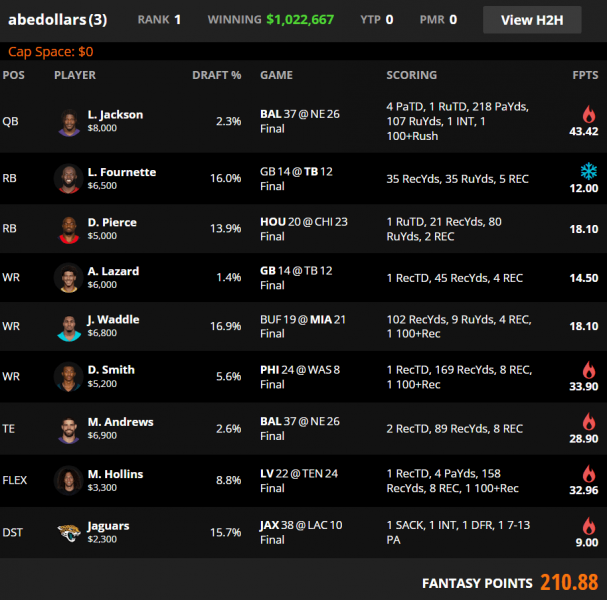 For the third time in three weeks, a tight end was used in the primary stack, twice in a QB/TE stack, and once in a QB/WR/WR/Opp. TE stack. In addition to their QB/TE stack, this week’s winner also used an RB/Opp. WR mini-correlation.

Another early-season trend in DraftKings has been the use of a fourth wide receiver in the flex, something that over 70% of top lineups have done every week. One of the biggest errors that the field has made compared to top-1% of lineups has been stacking tight ends in too many of their lineups.

One player that showed up in more lineups than expected was Miles Sanders, making Devonta Smith a fantastic leverage play, although he was already a sharp play for anyone that planned on playing Jalen Hurts and wanted to offset Hurts’ likely high ownership. The same concept was used with Jaylen Waddle who helped offset Fournette’s 16% ownership in the same game, although Fournette also surprised as he was expected to be one of those most popular players on the slate. 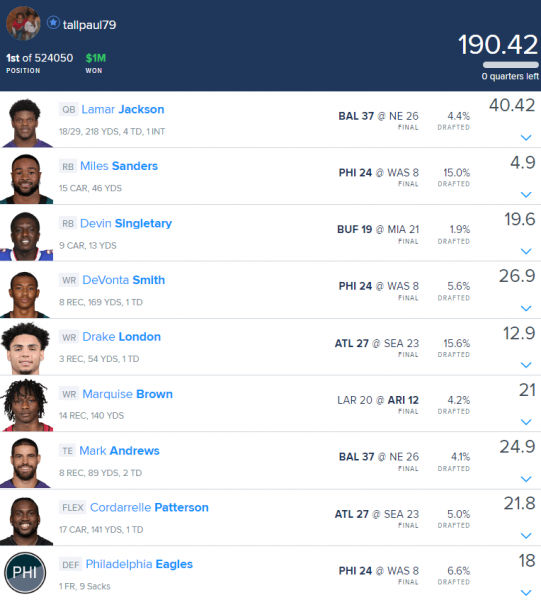 In addition to low-owned plays, this week’s Sunday Million winner added a second layer of uniqueness with the stacks used. Same-team stacks without a quarterback aren’t off the board by any means, but it’s rare that two RB/WR combinations are in the same lineup, especially when one of those also includes the team defense. The QB/TE stack made this the third time in as many weeks that a tight end was included in the quarterback stack, as is the case on DraftKings.

FanDuel’s scoring gives running backs and wide receivers fairly even upside, which is why we typically see a more even split on which position is used in the flex in winning lineups. The third running back used by this week’s winner made it the second time this year that the winner flexed a running back. This is only the second time since the beginning of 2021 that the Sunday Million winner didn’t roster a position player below $6,000.

The big leverage play in this lineup was Devin Singletary while the Bills and Dolphins passing attacks projected for high ownership. Usually, two running backs failing to hit 20 points with one under five isn’t going to get it done in large-field tournaments, but in a low-scoring week a 4.4% Lamar Jackson helped carry the lineup enough