Best ball leagues differ from traditional redraft leagues because there is an increased emphasis on roster construction in best ball. This is especially true in large tournaments such as Underdog Fantasy’s Best Ball Mania II. When trying to best more than 150,000 other entries, though, blindly following certain positional allocations isn’t enough.

How fantasy managers spend draft capital on each position should directly impact how many players they take at each position as well as how they should think about building upside into the rest of their roster. With such a high demand for running backs in the early rounds of drafts, it makes sense to explore that position—it also happens to be the most polarizing position in fantasy with truthers wearing badges of ZeroRB, RobustRB and #RBsDontMatter.

Using last year’s Best Ball Mania data, we can examine how teams that advanced beyond Round 1 attacked the running back position and use that data to formulate our running back strategy for 2021’s tournament.

How to Manage Running Backs in the Early Rounds

One ADP trend that was prevalent in 2020 and still present in drafts this year is the high demand for early-round running backs. As of this writing, running backs account for 10 of the top 12 picks on Underdog, with the 20th back gone within the top 40 picks. The knee-jerk reaction from some drafters might be to load up on the position early and often but one way that league-winners from the first Best Ball Mania separated from the field was by going light on the position in the early rounds. 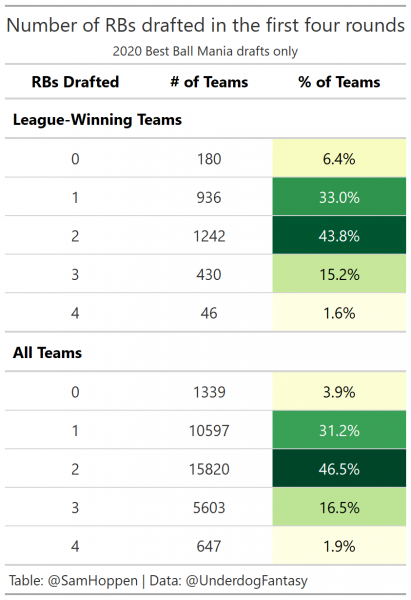 When we look at teams that took two or more backs through four rounds, the results flip—these builds accounted for a higher percentage of teams that didn’t advance to Round 2 than those that did.

How Many Running Backs Should You Draft?

In my recent Best Ball Mania II roster construction strategy article, I surmised that positional allocation is largely dependent on draft capital spent on that position. Intuitively that makes sense, but there should always be data attached to such premises.

Table reads: 24.4% of league-winners that drafted zero running backs in the first four rounds ended up with five total backs.

ZeroRB league-winners rostered seven running backs nearly as often as they drafted five at the position—teams investing no capital in running backs in early rounds can target early-round tight ends and quarterbacks along with early wide receivers. By doing so, 2-QB and 2-TE builds give league managers more flexibility to expand their running back roster beyond six spots (2-QB, 7-RB, 7-WR, 2-TE is the optimal scenario).

RobustRB builds, or teams that drafted more than two backs in the first four rounds were often comfortable building a roster with just four total backs.

When compared to the rest of the field, we see that league-winners typically drafted fewer running backs than their opponents and were overall willing to take on more risk at the position.

On the other end of the spectrum, many league-winners from 2020’s Best Ball Mania maximized team upside by staying on the low-end of the running back allocation spectrum. Teams that started with no running backs and ended up with just five overall were represented at a 34% higher rate among league-winners than non-winners (24.4% vs 18.2%); league winners that took three running backs in the first four rounds ended up with just four backs 17.4% of the time, a 28% rate increase over non-winners.

When Should You Draft Your Last Running Back?

It should be clear by now that the earlier a team targets running backs, the fewer they should take. What might not be so intuitive is how soon (or late) teams should fill out their running back roster based on early-round strategy. We know from other best ball platforms that you are less likely to hit on running backs at the very end of drafts than you are to hit at other positions. Looking at teams that made it through the first round of last year's tournament will give us the final piece to the running back puzzle. 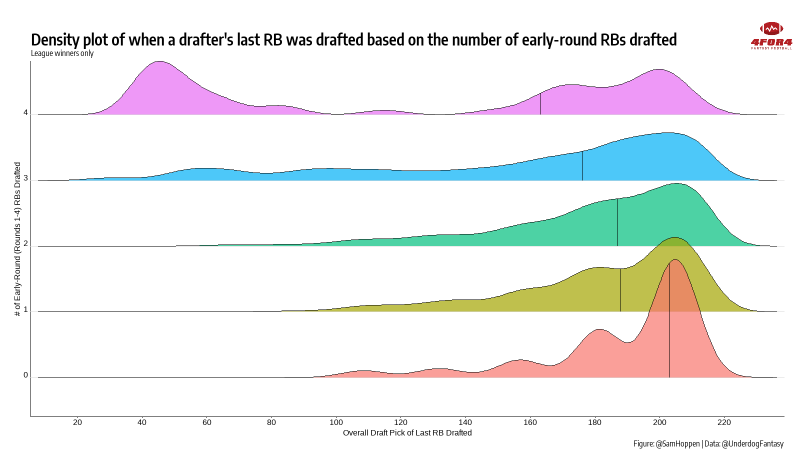 "If you’re unfamiliar with density charts, the x-axis shows the pick that a team's last running back was drafted and the y-axis shows the distribution of teams, sorted by the number of early round (1-4) running backs that were selected. For example, teams that drafted four running backs in the first four rounds typically stopped drafting running backs after the fourth round, or waited until the last couple of rounds to add their final back."

Visualizing this data through a density graph gives us more actionable information than, say, an average of when teams took their last back. The black bars in the density plots above represent the averages but we see with those 4-RB builds that most teams stopped drafting the position with their fourth running back or took one more stab at some point between picks 160 (the average) and pick 200—successful teams almost never loaded up on running backs early and then wasted picks on the position in the middle rounds, information that a simple average could never capture.

Player value traps—drafting a running back just because he is a value in the middle rounds, despite already loading up on the position—are often the downfall of many best ball teams and a perfect example of where novice players often forget the importance of roster construction and positional allocation.

Except for ZeroRB strategies, the last running back on winning teams was typically drafted in Round 16 or earlier.

Thank you to Sam Hoopen and Kevin Zatloukal for compiling the data used in this article. Follow Sam and Kevin on Twitter @SamHoppen and @kczat