Analyzing last week's results is one of the best investments of time you can make as a DFS player. Here I analyze winning lineups, low-owned players, and other notable Week 10 takeaways that can be used to gain an edge going forward. 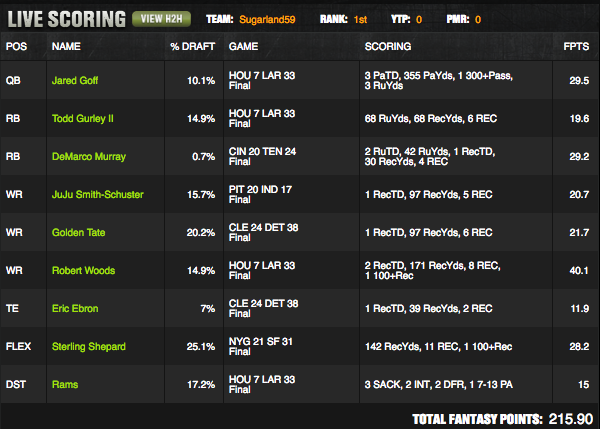 Sugarland59 took down the Millionaire Maker with a Rams onslaught stack consisting of Jared Goff, Todd Gurley, Robert Woods, and the team’s DST. Goff, Gurley, and Woods combined for 89.2 points, and readers of my published work on stacking back in 2016 may recall that QB-RB1-WR1 stacks (where the WR1 is considered the team’s highest projected WR) have the greatest probability of scoring 75 or more points of any three-man skill position combo.

This was the second week in a row the Rams offense figured heavily into the top of tournament leaderboards, so it’s worth taking a moment to unpack some of their success this season. This preseason I wrote about new head coach Sean McVay having a good track record with improving the play of his quarterback (Kirk Cousins) and wanting to use Gurley more in the passing game, and at this point, it’s clear McVay has had a positive effect on Jared Goff and Todd Gurley. Goff’s passer rating is up from 63.6 last season to 101.5 this season—seventh in the league and higher than Cousins (98.6). Gurley is third among all RBs in receiving yardage (406) and tied for second in receiving TDs (3).

At least of late, perhaps the biggest beneficiary of McVay’s presence has been Robert Woods. Having already scored on a called play action pass that got him isolated in single coverage deep downfield on a post route, Woods scored his second TD on a brilliantly designed fake end around that got him in enough open space that he only needed to make one defender miss for a 12-yard score:

There he goes again.

Have yourself a day, Robert Woods. pic.twitter.com/Gkvs2u0u7U

Woods has emerged as the team’s top wideout, leading the team in targets by five (59), catches by seven (39), and receiving yardage by 205 (612). The quartet of Rams all stood out In terms of GPP odds: Goff was fifth among QBs, Gurley was second among RBs, Woods was second among all WRs $5,000 or below, and the Rams defense was third among all defenses.

If you were among the 99.3% who didn’t own RB DeMarco Murray, how could you have landed on him?

Murray didn’t stand out in any particular way in our metrics, but one of the most important skills in DFS is being able to find value in players that don’t stand out in anyone’s models—including your own. Some of the best ways to find value in these situations are to look for players with high volume upside, a depressed salary, and unduly negative recency bias attached to them, which are the main three factors that got me on Murray last week. In our Week 10 DraftKings slate breakdown, I wrote:

“There's a number of other volume- and/or matchup-driven GPP dart throws in the mid-to-low salary range (Lamar Miller, Joe Mixon, Doug Martin, Matt Forte if healthy), but since I'm high on the Titans offense and that happens to be a fairly unpopular opinion, I like the leverage of rostering DeMarco Murray ($5,000). His injury-riddled 11-touch game last week has driven his salary down to its lowest point since 2015, and that lackluster game will likely keep people off him despite the salary decrease, and despite the fact he played 71% of the snaps last week—a three-game high. More importantly, he practiced in full on Wednesday. Murray handled 21 touches in the game before last and has similar upside, volume-wise, as a home favorite against a Bengals defense ranked a middling 15th in RB aFPA.”