Raybon's Review: What We Learned From Divisional Round DFS on FanDuel & DraftKings 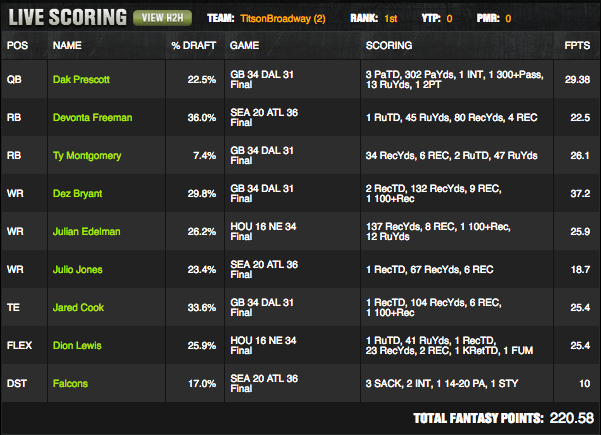 Congrats to TitsOnBroadway, who took down the Quarter Millionaire in large part thanks to Ty Montgomery, who was a recommended play in our Divisonal Round GPP Breakdown (as were Devonta Freeman, Dion Lewis, Dez Bryant, Julian Edelman, Jared Cook, and the Falcons DST). In that article, I noted that Montgomery, who ended up with six catches and scored two rushing TDs from in close, could just as easily fill Jordy Nelson's void from a volume perspective as any of the Packers WRs, and I also noted he was still getting carries inside the 10-yard line.

As the week progressed and we started to get an idea of what projected ownership would look like, it became clear that the majority of lineups would contain either Ezekiel Elliott or LeVeon Bell. That being the case, I started to believe there was a good opportunity to employ Nassim Taleb's barbell strategy, creating lineups with either Zeke and Bell, or neither of them. It turned out the latter side of the barbell was the correct strategy, as Zeke and Bell had floor games, and no cheap WRs really blew up.