Contrary to popular belief, kickers aren't very difficult to predict; it's really all about knowing how to leverage Vegas odds. In this article, I'll show you the makings of a valuable kicker, and how to attack the position in both cash games and tournaments.

What are the Makings of a Valuable Kicker?

To understand why Vegas odds are pivotal when it comes to projecting kicker performance, let's look at the correlation between kicker fantasy points and various other relevant statistics:

The strong correlations of field goals and extra points are obvious, so let's turn our attention to the two strongest non-kicking stat correlations: team points for and team points allowed. In combination, those two correlations tell us that kickers on the teams with the greatest margin of victory are scoring the most fantasy points. Why? Because teams tend to opt to kick a field goal more often when they're ahead (or put another way, when they're in positive game script):

By now you probably know where this is going. The weekly Vegas lines provide a sufficiently accurate outlook of how each game will turn out from a game script perspective, to the point where they can be used to project which kickers will score the most points per salary dollar: 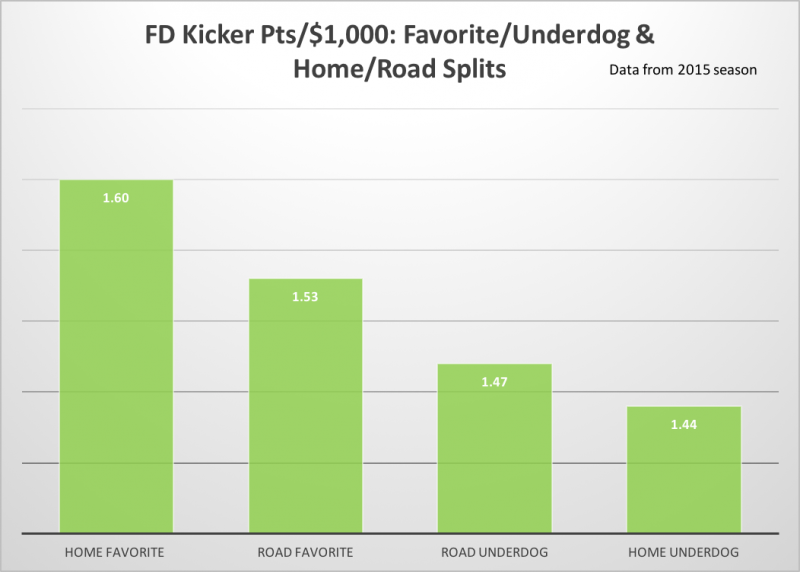 Kickers on teams that are favorites are the optimal play, especially when their team is playing at home.

Of course, that doesn't fully narrow things down. Knowing how many points a team is projected to score narrows things down further: 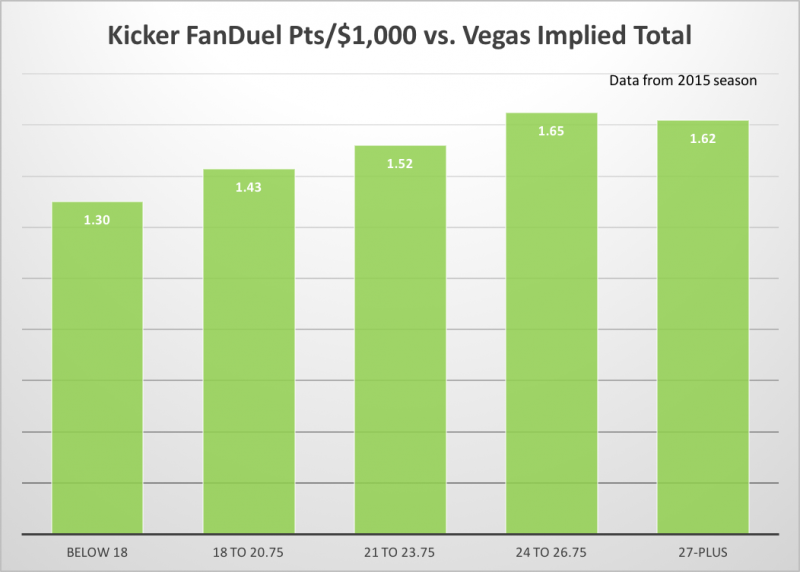 A kicker on a team with an implied total of 24 or more is the optimal play. Anything under 24, and diminishing returns begin to set in.

As you can see, the relationships between kicker value and Vegas lines are very predictive and straightforward.

The Makings of a Cash Game Viable Kicker

Putting it all together, a cash game viable kicker would ideally be a home favorite with a team total of 24 or above.

How much should you spend on a kicker in cash games? The table below shows kicker performance broken down by salary:

There was a slight advantage to taking kickers priced $4,900 and above, but the relationship isn't particularly strong to where I would aim for any specific salary range when selecting a kicker. The cheapest option that satisfies the Vegas criteria is usually the optimal play.

How to Select a GPP-Winning Kicker

If trends from the winning lineups of FanDuel's Sunday Million tournament hold up, kicker is a roster slot where you should embrace your inner contrarian:

The median ownership for kickers in winning lineups was under four percent. This makes sense, as ownership tends to be concentrated around a select few kickers that tend to fit in with the week's other highly owned players. With the strong relationship between favorites and kicker value, half of the kickers on a given slate essentially become viable options in a tournament, so it makes a lot of sense to go with the ones who are unlikely to be highly owned.