Daily Fantasy: How to Structure Your Leagues for Maximum Upside, Minimum Risk

As I’ve mentioned before, when I first started playing daily fantasy, I sucked. I couldn’t transfer my understanding of season-long leagues over to the daily realm, even though the fundamental concepts are the same.

I remember one week in particular. I submitted a few really strong lineups, and I figured it was going to be a big winning day. I don’t know about you guys, but I try not to check my fantasy scores too often on Sundays. I attempt (usually unsuccessfully) to watch the games in full in an attempt to avoid the whole laptop-on-legs-for-12-straight-hours phenomenon. Actually, if I stand up for more than 30 minutes total on game days, I consider that a win.

Anyway, I knew the players in my lineups were going off, and I managed to avoid checking my daily fantasy accounts until the end of the games. Have you ever done that? I doubt it, because it’s about the most challenging thing any degenerate could ever do. I’ve run a marathon**, and watching football for an entire Sunday without checking your fantasy lineups is 1,000 times more difficult.

I was killing on the day anyway, so I felt pretty good about just sitting back and relaxing. Except the only thing that I killed that week was my bankroll because, despite an above-average week, I finished only around the top 15th percentile of lineups. That would be awesome, except I submitted my optimal lineups, and almost all of my bankroll, into tournaments. Most of them paid out the top 10 percent of entrants.

Tournaments obviously offer a ton of upside, as I would have found out had I scored a few more points that week. But I’m glad I didn’t, because that was really a turning point for me in terms of money management and league selection. Our goal in daily fantasy is to minimize risk and maximize upside to the greatest extent that we can. League selection is a big part of that.

Heads-Up as the Foundation, Double-Ups as a Complement

In my article on how to play heads-up and 50/50 leagues, I suggested that head-to-head leagues should be the foundation of your daily fantasy repertoire. The reason is that the more you play, the less volatility you encounter. As you enter the same lineup into more and more heads-up leagues, the range of outcomes you experience is likely to resemble a bell curve and you become more likely to “get what you deserve.” If you’re a long-term winner, that’s a good thing. If I had entered the same top 15 percent lineup into 1,000 heads-up leagues, I would have taken down around 85 percent of them.

You can also use 50/50 leagues to increase your upside a bit. I recommend 50/50 leagues to those looking to quickly build a bankroll because, unlike heads-up leagues, they offer a lot of volatility. If you enter the same lineup into a bunch of double-ups, you could legitimately win or lose every one, which is very unlikely in heads-up leagues. Double-ups increase both your risk and your reward. For most, they should be a complementary piece of the pie.

The percentage of your bankroll that you place down on heads-up and 50/50 leagues will always depend on your expected winning percentage, but if you’re looking to grind out profits, at least three-quarters of the cash you have in play in a given week should be in those two league types.

Tournaments are awesome because 1) they offer the biggest prizes and 2) they offer the best long-term return. There’s so much “bad money” in tournaments because everyone and their brother enters them. The problem with placing too much of your bankroll in tournaments, as I experienced, is that it’s not consistent. It’s a great way to quickly make cash, and it’s also a great way to quickly lose it all.

Thus, to experience the long-term returns that tournaments can offer, we have to, you know, stay in the game long-term. That means continuing to build a bankroll with other league types to allow for tournament entries. I’ve always thought that if you’re covering your tournament entries with your heads-up winnings on a consistent basis, you’re doing something right; you won’t have significant risk of bankroll depletion, yet you still get the potential for big payouts from the large-field leagues.

In between heads-up leagues and tournaments, you’ll find all sorts of league sizes. When entering those, it’s key to understand the payout structure. A five-man league that pays out the top two entrants is much different than one that rewards only the top lineup. You can use the Kelly Criterion formula that I explained last week to help you understand how league size, payout structure, and expectations should affect your wagers and total cash in play. Nonetheless, using 10 and even 20-man leagues can be a quality way to increase variance when there aren’t necessarily any tournaments with overlay or a positive expected return of any sort.

How to Structure Your Leagues

Let me just say it right off the bat: there’s no one way that’s best to structure your lineups each week. I can’t say that you need a certain percentage of heads-up entries and tournament entries; it depends on the players you like in a given week, your expected winning percentage, your willingness to take on risk, and your Zodiac sign. If you happen to have Drew Brees, Jimmy Graham, and Lance Moore as your top three values in a given week, for example, that’s probably a good sign that you might want to place a slightly stronger emphasis on tournaments, five-man leagues, 10-man leagues, and other league structures that reward upside. That way, you can stack your Saints players to acquire the ceiling needed to take down a big league without reaching for value.

So your league structure really needs to be flexible. Having said that, I feel like I need to provide some sort of actionable advice here or else I’ll just seem like a total ass. Here’s a sample breakdown: 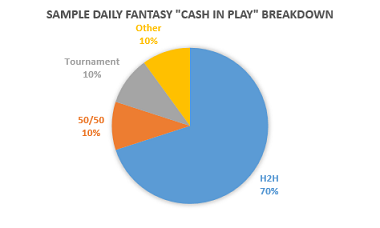 Again, you should really be flexible with the league types based on all of the aforementioned factors, but this is typically an approximation of how I structure leagues in order to maintain high upside without compromising my bankroll. So if I have $10,000 in play in a given week (which might be 30 or 40 percent of my entire bankroll), I’ll usually have around $7,000 in heads-up leagues and $1,000 each in tournaments, 50/50 leagues, and some combination of other formats.

**Note: I haven’t run more than two miles at one time in my life, but I’m assuming the cumulative 24.2 miles are pretty similar?