The Myth of Overworked Running Backs

One of the most frequent mistakes made by fantasy football owners is assuming all correlations are due to a causal effect. Lots of things in life are related, yet have no effect on one another. The old notion that great running teams win football games is an illusion based on a misunderstanding of the correlation/causation distinction, for example. Yes, winning teams average more rushing yards than losing teams, but that’s because teams that are already winning run the ball late in games. In reality, they usually gain the lead by passing the football effectively.

A prevalent fantasy football “truism” is the idea that overworked running backs struggle in subsequent seasons. There are numerous studies out there detailing how running backs struggle when coming off a season with 350 carries, or 370 carries, or however many carries is necessary for the study to make sense. The exact number is usually chosen ex post facto and is to be regarded as a “magical threshold” that spells doom in the following season if crossed. 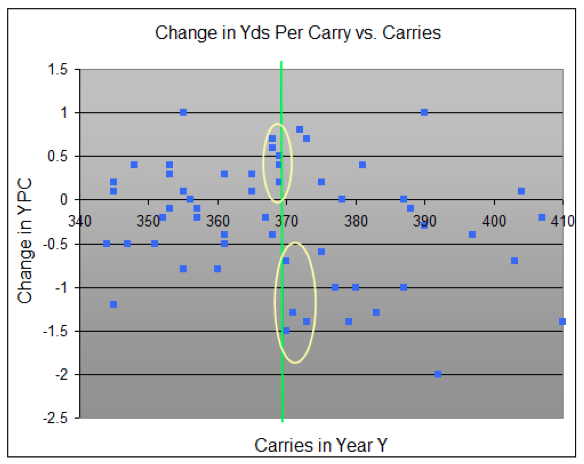 The graph above shows you just how silly some of this analysis can get. In a study on the effect of 370-plus carries on running backs, the number seems to be chosen after the fact because it makes the numbers more extreme. You can see the abundance of running backs that actually improved their yards-per-carry, yet came just a few carries short of 370. Are we really to believe a running back who carried the ball 365 times in a season is to be trusted in the subsequent season, but those with 370 are doomed?

In reality, though, running backs who garner a large number of carries in a season are generally more likely to see a drop in production and health in the following year, but this information is both insignificant and irrelevant.

Think about what it takes to acquire nearly 400 carries in a season. For one, a running back needs to be healthy. Really healthy. Secondly, chances are he is running efficiently. Running backs who average 3.5 yards-per-carry over the first half of the season don’t generally continue to see the 24 carries per game needed to break the 370 threshold. Thus, our sample size of high-carry backs is skewed by those performing well.

This is where regression toward the mean comes in. By filtering out injured and underperforming backs, selecting those with a high number of carries means we are selecting the outliers in more areas than one. We aren’t isolating the numbers based on carries, but rather based on health and efficiency as well. So when we make conclusions concerning health and efficiency, all we’re really saying is players who have unusual health and a higher-than-normal YPC are likely to have worse health and a lower YPC the following year. Uh, yeah... no kidding.

So yeah, running backs with a lot of carries in year Y usually see a drop in production in year+1, but it’s a product of regression, not a heavy workload. The graph below supports this idea. 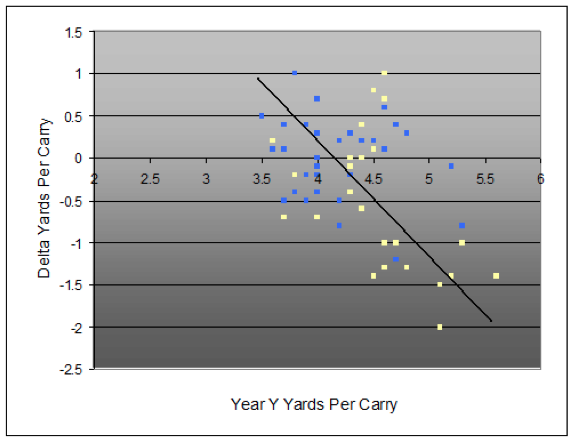 You can see the efficiency of all running backs tends to regress to the mean, not just those coming off seasons with heavy workloads. If a back runs for 6.0 YPC in a year, he will probably see a decline in efficiency whether he had 50 carries or 400.

Thus, while the production of a running back coming off a season with a heavy workload is likely to decrease, it is not a legitimate reason to avoid that player in fantasy drafts. The (probable) decrease in production is due to the previous season being a statistical outlier (a result that is unusually far from the mean).

The best way to look at the situation is this: what is the running back’s chance of generating production that is comparable to the previous year? It is actually the same as it was prior to the start of the previous season, i.e. the workload has no noticeable effect on his ability to produce.

For example, if a running back has a 20 percent chance of garnering 2,000 total yards in a season, that percentage remains stable (assuming his skills level does the same) from year to year. Thus, the chance of this player following a 2,000 yard season with another is unlikely, but not due to a heavy workload (a necessity for such productive output), but rather the fact that he only had a 20 percent chance to do so from the start. We wrongly (and ironically) attribute the decrease in production to the player’s prior success when, in reality, no such causal relationship exists.