2012 Contract Year Players and the Myth of Increased Production

If July is the time that the most diehard of fantasy football owners are pulling together their initial fantasy football rankings, August is the season for getting bombarded with football “truisms” that often turn out to be anything but, you know, true. “Player X is a wide receiver in his third season and Player Y is coming off of a season with 300 carries.” Okay, cool.

One of the fantasy football rules-of-thumb you’re bound to hear again and again this year is to target players in contract years. According to many fantasy football analysts, players entering the final year of their contracts have extra motivation to cash in and will thus post outstanding fantasy numbers.

On the surface, the idea seems to make sense. And if it seems like it could be true, eventually it will “become” true within the world of fantasy football. Fantasy owners and experts will search for confirming instances of players in contract years lighting it up, and they’ll find plenty of such occurrences. They’ll see Marshawn Lynch’s 2011 outburst, Ahmad Bradshaw’s big 2010 season, and Maurice Jones-Drew’s 2009 breakout campaign. Ah, three confirmations of a very grandiose, overarching idea. It must be true.

It’s very easy to remember instances that confirm a hypothesis. When one high-powered fantasy expert claims that NFL players exceed expectations in contract years, fantasy owners accept that idea and then look for occurrences that confirm their new belief. Often times, it isn’t even a conscious decision.

For every Lynch, Bradshaw, and Jones-Drew, however, there is a Derrick Ward in 2008, T.J. Houshmandzadeh in the same season, and DeSean Jackson in 2011—all players who underachieved in a contract year. It’s easy to forget information that negates a hypothesis, but when it comes to NFL players in contract seasons, it appears as though underachieving is just as common as its counterpart.

I did some research on the fantasy performances of NFL players in contract years since 2008. To make an assessment of their play in their contract seasons as accurate as possible, I compared their performances to their production in the previous two seasons. Exceptions included players who were injured for an extensive portion of one of the prior seasons and players whose workload recently shifted dramatically. The total sample size was 121 players, excluded bench players and those without two years of past production. For the most part, though, the data includes just about every contract year player from the past four seasons. 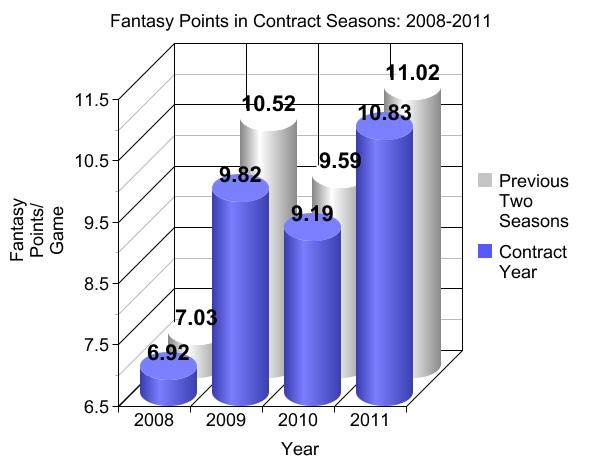 You can see that the fantasy points-per-game of players in contract years have been remarkably similar to their production in the two seasons prior to their contract seasons. Actually, their fantasy output has actually been slightly lower than anticipated in every season since 2008. The difference isn’t statistically significant, but the results indicate that there’s no real motivational factor that causes NFL players to produce superior numbers in contract years.

Let’s go further and break down the results by position. . . 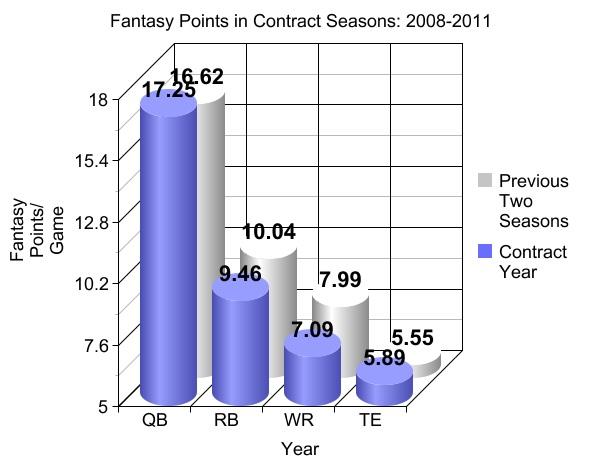 You can see that, regardless of position, the production of players in their contract years matches up extremely well with their stats from the previous two seasons. No matter how you slice it, NFL players simply don’t overachieve in contract seasons.

And as if the results weren’t conclusive enough, consider that 50.5 percent of the players assessed scored more points-per-game in the two years before their contract season than in it, while 49.5 percent obviously did just the opposite. That’s about as obvious as it can get; NFL players, over large sample sizes, will play exactly the same in contract seasons as they did before them.

So when you hear a fantasy analyst touting a player because he’s in a contract year, you will know that the player’s fantasy stock may be artificially inflated because of a factor that simply has no measurable effect on performance.

For the stubborn owner out there still looking to catch contract year lightning in a bottle, here is a list of [somewhat] notable 2012 contract year players: