Analyzing last week's results is one of the best investments of time you can make as a DFS player. Here I analyze winning lineups, low-owned players, and other notable Week 12 takeaways that can be used to gain an edge going forward. 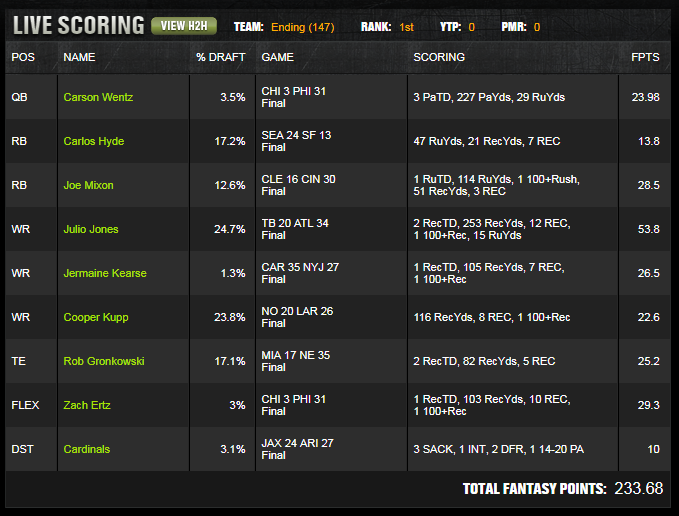 For just the second time in the past three years and the first time this season, a tight end was in the FLEX spot in the winning Millionaire Maker lineup. Assuming Ending meant for Gronk to be the true FLEX and Ertz was always going to be stacked with Wentz, flexing Gronk over the more popular Tevin Coleman (29.0%) and T.Y. Hilton (20.0%) was key, as Gronk outscored Coleman by 3.5 points and Hilton by a whopping 21.7. Also note that Gronk provided leverage on teammate Brandin Cooks, who came in slightly more owned (18.6%) but scored 3.8 points less.

As usual, our DFS metrics rated the core players in the winning lineup highly. Carlos Hyde was our top value on the slate, and though he predictably struggled with efficiency against a tough Seahawks front, he did just enough to land Ending the victory. Joe Mixon was the top RB value under $5,500 and was fifth in value among all players on the slate. Julio Jones had a two-percentage point lead over any other WR in GPP odds against a Buccaneers defense ranked as the best matchup by aFPA to WRs. Kupp led all WRs under $5,600 in GPP odds. Gronkowski was second among TEs in GPP odds.

If you were one of the 96.5% who didn't own QB Carson Wentz, how could you have landed on him?

Despite the Eagles having one of the highest implied totals on the slate, Wentz ended up going overlooked. He was fifth among QBs in GPP odds and was the only player priced in the top-five at his position to have a GPP leverage score above 1.0.

If you were one of the 98.7% who didn't own WR Jermaine Kearse, how could you have landed on him?