Raybon's Review: What We Learned From Week 5 DFS on FanDuel & DraftKings 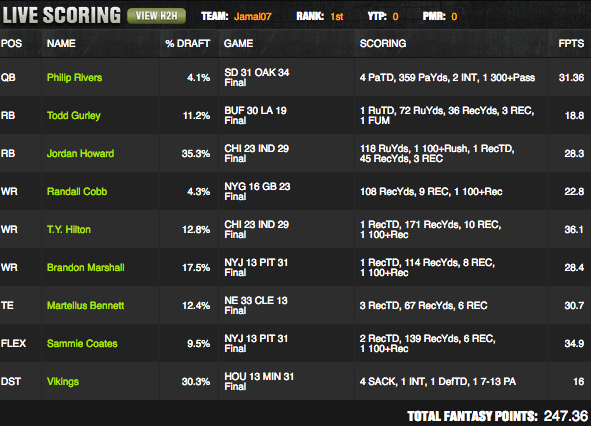 Jamal07 took down the Week 5 Milli' Maker with a balanced lineup that featured five players priced between $6,200 and $7,400. This is noteworthy because while there always seems to be endless weekly chatter about contrarian plays, there is less talk about contrarian lineup construction. Antonio Brown ($9,800) and Odell Beckham ($8,500) accounted for a combined 53.3% of WR ownership, and paying up for one of those two meant entrants also relied heavily on Jerick McKinnon ($4,000) and DeAndre Washington ($3,400), who accounted for a combined 44.2% of RB ownership. By simply not paying more than $7,400 for any player, Jamal07 was able to build a unique lineup despite 6-of-9 selections having ownership of 10% or more.

Randall Cobb was Jamal07's best contrarian play. Cobb was under 5% owned, but Mike Woeller highlighted Cobb's matchup as one to exploit in his Week 5 WR vs. CBs column (available to DFS subscribers).

You're Missing Out!
A DFS subscription includes:
UPGRADE
Already a subscriber? Log in?
About Author

WR vs. CB Matchups to Exploit & Avoid in DFS: Week 6