Raybon's Review: What We Learned From Week 12 DFS on FanDuel & DraftKings 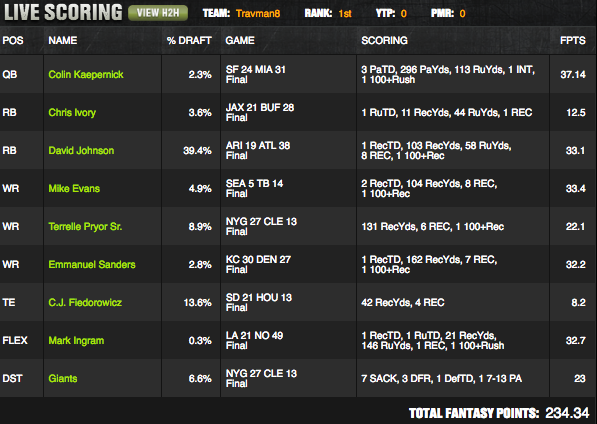 Congrats to Travman8, who took down the Millionaire Maker behind a very contrarian lineup highlighted by Mark Ingram's 32.7 points at 0.3% ownership. Hindsight bias is 20/20, but what were some of the potential ways you could have been one of the 0.3% to land on Ingram? One way would have been to take into account that he was a large home favorite with a high team total. You could have also noted that even though he had been splitting work with Tim Hightower, it didn't stop him from having a huge 34.1-point game in Week 9 (albeit against a league-worst 49ers run defense). Yet another reason was Ingram was a leverage play off Drew Brees, Brandin Cooks, and Michael Thomas, who were all at least $1,600 more expensive than Ingram. And speaking of price, Ingram's $5,000 salary was down $1,600 from when the season opened. I suspect most of us wrote Ingram off because the news he would play didn't come until the wee hours of Sunday morning, or maybe it was because he was returning from an injury in the first place. Historically, though, concussions don't have an effect on RB production on somewhat of a limited sample.