Somebody tricked me. I got all excited for the weekend thinking there’d be plenty to write about. False alarm. I’ll get into the details below but wanted to recap one of my takeaways from last week before diving into Week 6.

It might be an odd quirk of mine as if writing about the weather wasn’t already a red flag, but I get more introspective when I’m right for the wrong reasons. It’s just part of my process-oriented nature. Mistakes or just being flat-out wrong (and the emotions that come) are the usual catalyst for re-examining a method. Getting the desired result but bypassing the method is worse. It’s like I missed something. Case in point from Sunday night.

I noted the rain as a possible factor for Sunday night, but the timing and how much rain were unknowns. I got the “don’t change your roster” part right, weather obs for the night did show heavy rain, and game flow dictated passing rates for both teams (four rush attempts for the Chiefs in the second half). Rain effects were mostly muted but the delay largely helped. I should’ve noted it and will add it to my notes for future games.

BLUF: I was so ready to dive deep into my database of games played in high winds after seeing a few tweets about this weekend’s games. It doesn’t look like I’ll need it. We’re still a couple of days out, but I’m not worried. There are three games *just* over the minimum threshold with nothing exceeding 20 mph. The Cleveland game carries the most concern, we dealt with this last season, and I’ll detail it below. Otherwise, I’m not changing anything about these games.

I’m also tracking the London game. I still haven’t fixed my scripts (I’ll get to it someday), but the game is clear. Here’s the link:

Quick Update: Double-checked each game and the WAS/KC game was down to 13 mph. I’ll leave it on the table but won’t add a write-up for the game. If things change on Saturday, I’ll add in some notes.

10/16 Update: I'm adding my Saturday update up top as I can summarize the changes to the forecast in one word: none. The forecast for each game remains the same. I still have no explanation for the game total drop, but the weather shouldn't have any impact on how it plays out. I'll double-check prior to kickoff but everything appears clear for Sunday.

10/17 Update: Still no change. Winds in Cleveland are projected to start at 20 mph but will trail off as the game progresses. Windspeeds in Baltimore also holding in the 16-17 mph range but they're in the direction of the stadium. Fantasy managers should proceed with these games as they had all week. Good luck!

I’m trying something new. Here’s a basic visual of the airflow across the stadium from an aerial view. 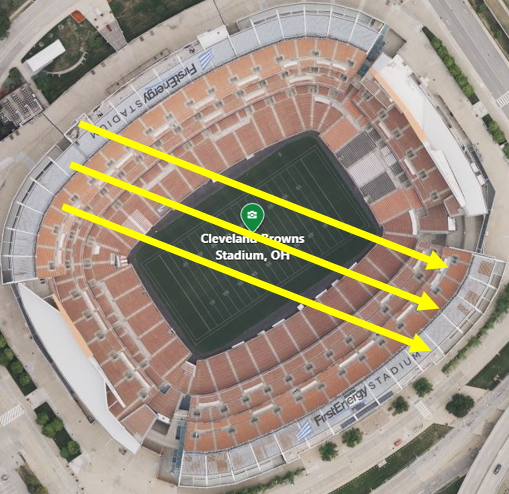 The WNW is the direction from where the wind originates. As a result, if the vector holds, it’ll create a slight left-to-right cross breeze. If I were concerned, and I’m not, the chance for a crosswind would be my main point of contention. High winds in the direction of a stadium can be mitigated with adjustments by the quarterback. Kind of like adjusting a golf swing. But, at least as of today, we don’t have much to worry about.

Most folks will see “wind” in the weather, see Cleveland as the locale, and think back to Weeks 8 and 10 of last season. We’re not at that point, yet. Far from it. Windspeeds earlier in the day will crest 20 mph but are expected to fall as we get into the afternoon making the 4:05 EST game-time conditions more manageable. I have no concerns for the Cardinals’ offense with their baseline pass rate over expectation (PROE) above league average (12th). Cleveland (30th in PROE) may look like they’ll lean more on the run, but Baker Mayfield’s been in these situations before.

“Neutral Pass Rate Diff” is the delta between the Browns’ neutral passing rate during that specific game and all of their preceding games. Just the raw difference and not the percent change. It’s a simple way to at least indicate if the elements were a factor. Also, I added the one game from 2019, but I’m discounting it due to the coaching change after the season. Regardless, there are a couple of key takeaways here.

First, there’s no significant change in neutral pass rate around 20 mph. In the two cases at 18 mph, we have swings in both directions and I’m willing to call a 3.2% split negligible. It’s only until we get to 25+ mph that we see a noticeable drop which should be expected. So, my conclusion is the weather on its own won’t influence how the Browns call the game. Mayfield’s passing depth also points us in that direction.

His air yards (AY) per attempt hovers around an 8.9 average until we get to the extreme conditions in Week 8. Plus, his AY per attempt on the season was 8.4 which emphasizes the lessened impact of the wind assuming the conditions hold under 25 mph. Cleveland was sixth in deep-ball rate last year and Mayfield is fifth in downfield attempts this season. Again, the data leads me to a similar game plan from the Browns.

The stadium is 171 feet tall, provides a natural barrier for winds at this velocity, and the data has shown it hasn’t had a massive impact on Mayfield’s opportunity in similar games. And, I want to stress the word “opportunity”. Fantasy point totals can’t contextualize tackles at the one-yard line that turn into rushing touchdowns or penalties that short-circuit scoring drives. And since the latter actually happened on Cleveland's first drive against Houston last year, our focus should be on how each offense will approach the game. Not just the results themselves.

Quick Update: It’s not really an update, but more of an additional thought. The part I can’t square about this game is its total. It opened at 54 and dropped by four points within a day. At first, I thought it was a clear sign that weather would be an issue but I’m not seeing it. Maybe injuries? I’m not sure. 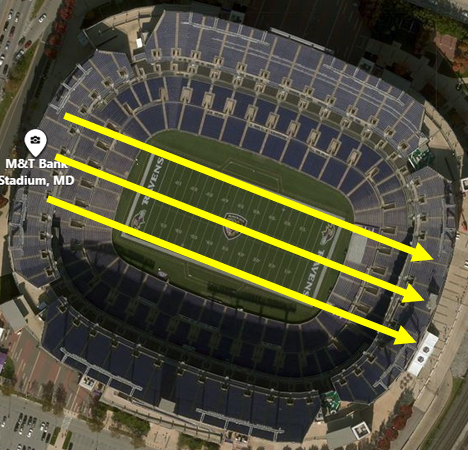 The weather current almost perfectly lines up with the stadium’s azimuth. An alignment like this removes almost all concerns for a crosswind. Even if the velocity was higher, we’d be looking at adjustments similar to what I suggested for ARI/CLE. But, with a lesser wind speed, I’m not considering it a factor. Plus, M&T Stadium, at 185 feet, is taller than FirstEnergy Stadium further diminishing my concern.