Raybon's Review: What We Learned From Week 2 DFS on FanDuel & DraftKings 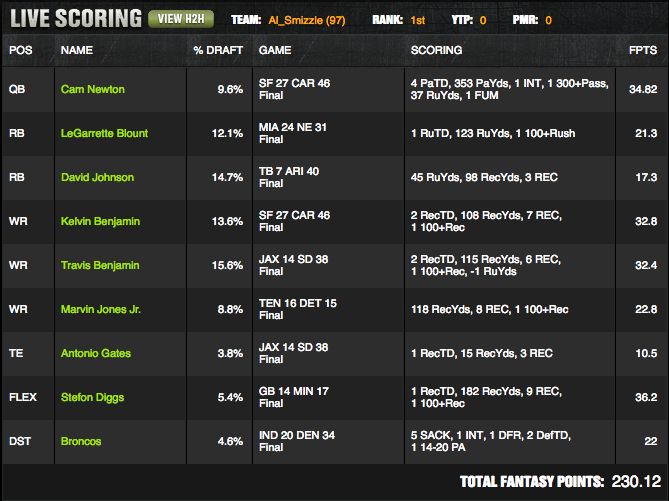 First of all, congrats to Al Smizzle for a well-deserved win! I got the chance to meet and speak with Al at last year's winter FSTA conference, and it was a pleasure. Winning the Milli' couldn't have happened to a better dude.

As far as Al's lineup, the one thing that stands out is he didn't spend as much at WR as we're used to seeing in winning lineups. Earlier this week, I wondered aloud if we would see cheaper WRs than usual in the winning lineups, which ended up happening here on DraftKings, and on FanDuel as well, which I'll discuss in a bit.

Six of the nine players in Al's winning lineup were recommended in the DraftKings Week 2 GPP Breakdown; Stefon Diggs, David Johnson, and the Broncos were absent. Al could have still won by going with either DeAngelo Wlliams or C.J. Anderson at a lesser cost than Johnson, and could have also gained a point by going with the Cardinals over the Broncos for $100 less, so Diggs was the big miss. My thinking at the time was that Diggs would not be able to post a repeat 100-yard performance with a new QB going against a defense that held Allen Robinson to 72 yards on 15 targets the week before. In hindsight, Diggs is a different type of receiver than Robinson; Diggs relies on precise route-running and quickness, while Robinson's game is more about making plays at the catch point. Furthermore, it could be argued that Sam Bradford is the best QB Diggs has ever had for fantasy purposes. I also underestimated the absence of Packers cornerback Sam Shields.

Another thing I think is important to note is Al didn't necessarily "hit" on all his picks. I mentioned there were better plays than Johnson at his price point, and Delanie Walker also scored twice as much as Antonio Gates at the same price. This got me thinking about our search for "big games", popularized by TJ Hernandez in his Big Game Profiles.

Do we actually need big games at every single roster slot?