Raybon's Review: What We Learned From Week 14 DFS on FanDuel & DraftKings 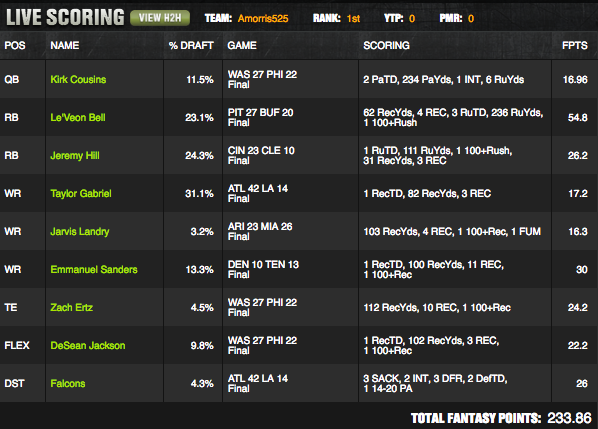 Amorris525 took down the Millionaire Maker thanks to LeVeon Bell dancing his way to 54.8 points in the snow. For whatever reason, Bell tends to be at his most productive on the road, while Ben Roethlisberger and Antonio Brown lead the offensive charge at Heinz Field.

On a week where only three QBs on the main slate scored 20 or more points, Kirk Cousins sufficed at QB. The key was pairing him with DeSean Jackson against an Eagles team that had been getting long-bombed more than any team in the league over the last six weeks before Sunday afternoon's game. The Cousins-Jackson stack cost an average of $5,650 per player, which allowed Amorris525 to afford Bell and still manage to fit a bunch of other players in the middle tier of salary, with no non-DST cheaper than Taylor Gabriel at $4,300. I have been tracking winning Millionaire Maker lineups since the start of 2015, and while you always have to take winning lineup construction data with a grain of salt because they will tend to reflect how all lineups are created, it is notable that the average QB stack (present in 70% of lineups) cost $5,979 per player. Millionaire Maker winners aren't breaking the bank with their QB stacks: 52% averaged under $6,000 and only 14% averaged over $7,000.

Amorris525 also brought it back with Zach Ertz in a correlated opposing passing game stack, discussed at length in The Definitive Guide to Stacking on DraftKings. I admittedly thought going back to Ertz felt like chasing his 9-79-1 Week 13 line (especially with Jordan Matthews returning), but Ertz was facing another team ranked near the bottom of the league in aFPA and the Eagles had attempted 43+ passes in four of their last six games.

Tournaments
A Profitable Gameplan for NFL DFS on DraftKings