Week 1 is finally here. Since salaries have been out for what seems like forever, there are quite a few players on DraftKings that are mispriced, to say the least, which is great news for our cash game lineups. When building lineups for head to heads, 50/50s and double ups, maximizing value is paramount and we can generally ignore ownership percentages.

Early in the season, though, it can be difficult to pinpoint where the actual value lies and what is actually fool’s gold. Vegas is always a great indicator for game flow and scoring, as are projection-based value reports, but with no in-season data to pull from, these models are going to be slightly less reliable early in the season.

One way that we can uncover pricing inefficiencies in the passing game -- which are especially important with DraftKings’ full-PPR scoring -- is to compare quarterback salaries to the salaries of his pass catchers. Teams that have expensive receivers and a cheap quarterback might point to a quarterback that is a value, and vice versa. I’ve compared every quarterback's salary to the salary of his top-three projected pass-catchers and will reference those numbers where appropriate. 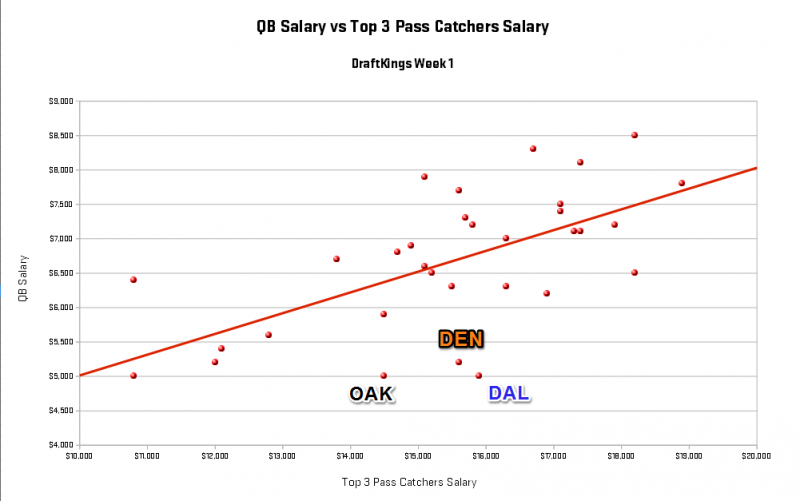 Tony Romo broke his back and Uncle Rico ain’t walkin' through that door. Enter Dak Prescott. Even without knowing anything about Prescott, we can look at his salary relative to the Dallas pass catchers and see that there is some value to be had there (teams that fall below the trend line indicate a quarterback that is underpriced). With two reliable pass catchers in Dez Bryant and Jason Witten, and arguably the best offensive line in the league, Prescott will be making his first ever start in one of the best situations imaginable for a rookie quarterback, and I haven’t even mentioned his rushing ability.

Prescott rushed for at least 500 yards in each of his last three seasons at Mississippi State. Rostering a quarterback that can pick up yards on the ground is always a nice insurance policy to have in cash games. Given his minimum salary, it’s not difficult to imagine multiple scenarios where the rookie reaches the 3.5x value threshold that Chris Raybon suggests for your cash games.