Week 8 Millionaire Maker winner gvalstyle took down the grand prize off the strength of 3.2-percent-owned Drew Brees dropping a 50-piece. 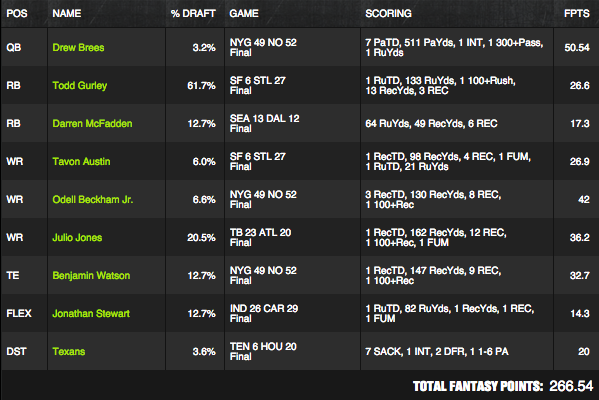 Gvalstyle employed an astute lineup construction strategy of pairing Brees and Ben Watson with Odell Beckham, which creates synergy. If one passing game goes off, it puts pressure on the opposing one to do so as well, which TJ Hernandez and I discussed on this week's DFS MVP Podcast.

Speaking of synergy, it's time to put to rest that you shouldn't employ negatively correlated stacks such as RB-WR, opposing RBs, etc. While certain positions may be negatively correlated over the long term, a philosophy of avoiding those stacks completely fails to take salary and value into account. We've seen multiple millionaires be crowned this season alone due to stacks that many in the fantasy community are quick to write off. Gvalstyle stacked Todd Gurley and Tavon Austin, for the win.

In the space below, I'll focus on players I believe to be strong tournament plays based on their potential for high volume, multi-touchdown upside, and low projected ownership. I won't blurb the chalk plays (Tom Brady, Devonta Freeman, Todd Gurley, DeAngelo Williams, Alshon Jeffery, Odell Beckham, Malcom Floyd, Rob Gronkowski, Antonio Gates, and the Broncos) -- they're all justifiable GPP options (with Brady and Freeman being particularly elite options), but you won't take home big money by stuffing your entire lineup with chalk. Use chalk plays selectively, a few at a time, filling out the rest of your roster with players likely to be low-owned who have high-volume and multi-touchdown upside in their range of outcomes.

As usual, I draw heavily from my Tournament Ownership Outlook column, and all the players I highlight below are players I believe you should have more exposure to than the field. Since who you fade can be just as important as who you play in a GPP, I've also added a "Fades" section at the end where I briefly highlight any highly-owned players that I believe you should have less exposure to than the field, or no exposure at all to.

Ben Roethlisberger's price ($6,600) is $700 below where it opened the season. The price point represents a season-low, and has not been lower since Week 8 of 2014. Although DeAngelo Williams was owned nearly five times more than Roethlisberger on Thursday FanDuel slates, Steelers-Raiders sets up as a game where the Steelers will favor the pass. The Raiders permit the second-fewest rushing yards per game (82.9), but the second-most passing yards per game (302.1). The Steelers current Vegas implied total of 26.3 is fourth-highest of 24 teams playing this Sunday. In 11 career games with Martavis Bryant. Roethlisberger has averaged 329 passing yards and 2.2 TDs per game.