4 Inexpensive Backfields To Target in Your Fantasy League

How do you like to build your fantasy Football Teams? Do you prioritize running backs or wide receivers early in drafts? Do you prefer to use positional tiers and select the best player available based on the flow of the draft? There are many ways to build a fantasy championship-winning team. This article will tell you about four backfields you could target to find backs you can insert into your starting lineup outside of the high-leverage rounds of your fantasy draft.

The Lions backfield is very attractive from an ADP perspective. Detroit selected Georgia D’Andre Swift in the second round of this year’s draft. He finished his collegiate career with 2,885 rushing yards on 440 attempts, which places Swift seventh on the Bulldogs all-time list. He also led Georgia’s backs in receptions in each of his three seasons in Athens while averaging greater than nine yards per reception. 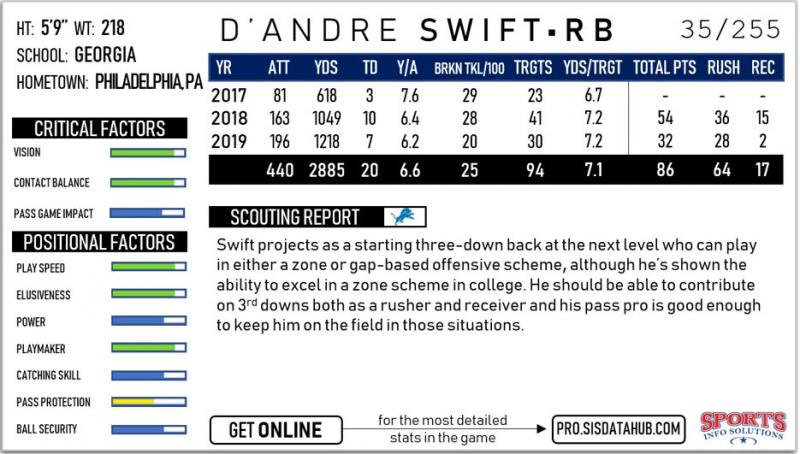 Detroit also drafted running back Jason Huntley out of New Mexico State in the fifth round of the 2020 draft. He accumulated more than 1,000 receiving yards over his college career and was also a solid return man on special teams. Huntley profiles as more of a satellite back. The Lions also still have Kerryon Johnson on the roster. The second-round pick from the 2018 NFL Draft has missed 14 games in his first two seasons due to knee injuries.

Johnson has only averaged 11.5 half-PPR fantasy points per game in his NFL career and hasn’t been particularly productive with his number of opportunities with you analyze various efficiency metrics. Last season, the Lions turned to power back Bo Scarbrough when Johnson missed time. Scarbrough averaged 4.2 yards per rushing attempt on 89 carries.

The Lions also drafted Ty Johnson in the sixth round in the 2019 NFL Draft. He averaged 4.3 yards per rushing attempt on 63 carries last season. Johnson also had 24 receptions.

Our initial projections have Swift leading the Lions backfield in touches, total yards, and fantasy points. Detroit finished last season ranked 21st in rushing yards (103.1) per game and 15th in rushing attempts (25.4) per game. These statistics didn’t sit well with Lions offensive coordinator Darren Bevell. His previous offenses in Seattle (2011-2017) and Minnesota (2007-2010) finished in the top-10 in rushing percentage 67% of the time. Bevell will have an opportunity to rekindle that magic with Swift in the backfield and hopefully not deal with multiple quarterback injuries.

Swift is currently the RB28 according to our ADP while Johnson is currently the RB34. Both are on the RB3 radar as the top two backs in the Lions committee this season. It’s wiser to view Swift as an RB2. He has a legitimate chance to become a bellcow for the Lions and a league winning addition to your fantasy Football Team.