Latavius Murray is the 2019 Golden Ticket to Zero RB

Following the signing of a multi-year deal with the New Orleans Saints, there’s a potential path to Latavius Murray finding himself as the top Zero-RB candidate for the 2019 season.

It’s truly remarkable that in 2019, Latavius Murray just signed the 15th-highest contract value at the running back position. Murray’s path to signing with the Saints for a third NFL contract was such an improbable one, that it warrants revisiting.

After being drafted in the sixth round of the 2013 NFL draft, it’s rather remarkable that after putting up just 84 yards in his first two seasons, he became a 1,000-yard rusher and a top-12 fantasy asset.

Over the past decade, Murray is one of just four backs to not have been invited to the NFL Combine and produce a 1,000-yard rushing season. He is just one of three running backs to score at least six rushing touchdowns in each of the past four seasons. Mark Ingram is one of the other three.

The Saints elected to keep the one-two punch at running back they had with Ingram and sign one of the better free agents available in Murray. New Orleans inked him to a four-year, $14.4M contract. Half his contract is guaranteed money with New Orleans able to cut him after 2020 for just a $1.7M dead cap hit. That type of contract spells out that they intend to use Murray in a similar role to that of Ingram, creating the potential for a fantasy star to emerge.

Excluding the last couple seasons, the Saints were regularly ranked in the top-10 in terms of pass play percentage since the 2010 season:

You can see that Sean Payton relied on Drew Brees for much of his coaching tenure, with Brees racking up 5,000-yard seasons annually and piling up the awards.

As Brees enters the twilight of his career, the run play percentage has begun to surge in recent years. New Orleans has built a strong offensive line and defense, while collecting multi-faceted running backs. Alvin Kamara, Mark Ingram, Darren Sproles, and Pierre Thomas have all contributed top-24 PPR seasons during the past eight seasons. In fact, during that span, the Saints have led the league in running back fantasy points six different times.

That’s why this Murray signing with the Saints is so important. Not only do the Saints regularly produce top-24 contributors, but the volume is never relegated solely to one back. Over the past two years during the Kamara/Ingram tenure, Kamara has averaged 15.4 touches per game and 21.3 fantasy points per game. Ingram has averaged 16.0 and 15.1, respectively.

There is a ton of overlap in where both Murray and Ingram have succeeded during their time in the league.

Murray and Ingram both ranked top-five in the number of short-yardage conversion opportunities over the past four years. These are plays with two yards or fewer for the running back to carry and convert. Out of the 49 players with at least 40 of these opportunities the last four years, Murray and Ingram ranked in the top half of conversion rates for either a first down or a touchdown.

They both were also extensively used inside the opponent’s five-yard line, coincidentally also ranking top-five in these opportunities. Murray could end up being a slight upgrade in this department with a higher touchdown rate on fewer opportunities. That could mean an even stronger fantasy outing than what Ingram’s posted in the past, considering New Orleans has ranked top-five in most red zone trips per game over the past five seasons.

One noteworthy part of Ingram’s game has been his inclusion in the passing offense. He has averaged 54 targets per year over the past four seasons. Murray’s career-high is just 53 targets (2015). That being said, just because Minnesota elected to not throw to him, Murray’s career catch rate (79.0%) falls right in line with Ingram’s (79.7%). If Murray gets the green light to be used as a rushing, red zone, and receiving back, it could be wheels up for his fantasy potential in 2019.

For those unfamiliar with the Zero-RB drafting method, hello. Glad to see you’ve surfaced from that cave you’ve been hiding in since 2013.

RotoViz’s Shawn Siegele popularized this drafting style by electing to embrace the volatility of predictions and anticipating injury at the position exposed to some of the most violent hits in the game.

The goal is to heavily target the wide receiver and tight end positions at the beginning of drafts. Locking in these players with heavy target shares gives us high-quality receiving volume before addressing the running back position at all. The focus then becomes looking at players on the precipice of a breakout season, pass-catching backs in timeshares, and backups that are an injury away from starting.

Murray could be in the mix for both the first and third elements there. Even as a part-time player, he’ll have plenty of week-to-week volume that you can rely on. Ingram’s 16.0 touches per game over the past two years is a valuable role, especially considering he was the fantasy RB6 in 2017. The scary potential for Murray is that he could be an improved version of Ingram that remains a Kamara injury away from top-shelf RB1 production.

Murray’s ADP over the month of March has seen an uptick since he signed with the Saints (March 12th). 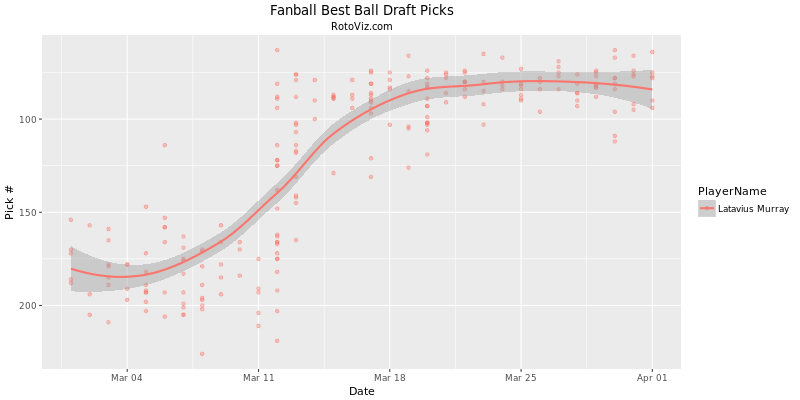 That being said, it’s already plateaued relatively quickly to the RB45 on Fanball’s full PPR site. Based on Ingram's past with New Orleans, we can pencil in Murray with relative certainty for at least a top-24 floor. Murray remains an easy buy candidate and someone worth reaching for at his current ADP, which should continue to rise as we get closer to September.

In dynasty leagues, he’s another buy target if the window hasn’t closed yet.

A few recent trades that were available from Dynasty League Football’s Trade Finder include:

I’d be willing to sell any second-round pick straight up for Murray in this year’s rookie draft class. If adding in a third makes your trade partner feel better and gets the job done, build some trust there for future trades and throw it in. Most third-round picks have less than a 10% hit rate.

Latavius Murray signed a sizeable contract with one of the league’s highest-scoring offenses, locking himself into a valuable fantasy role. He remains just an injury away from weekly RB1 production. Continue to try and acquire him in dynasty leagues and don’t be afraid to reach for him in current best-ball drafts. His ceiling is going to be worth the chase.

Strategy
Understanding Your Fantasy Football League
by Brandon Niles · May 17, 2021

Strategy
How to Play Fantasy Football
by Brandon Niles · May 17, 2021