In his book Fooled by Randomness, Nassim Nicholas Taleb writes:

“Our mind will interpret most events not with the preceding ones in mind, but the following ones...While we know that history flows forward, it is difficult to realize that we envision it backward...Our minds are not quite designed to understand how the world works, but rather, to get out of trouble rapidly...Psychologists call this overestimation of what one knew at the time of the event due to subsequent information the hindsight bias, the ‘I knew it all along’ effect.”

I want to focus on the last part of the paragraph, the “I knew it all along” effect which is present every week in DFS. Consider last week’s winning lineup in FanDuel’s Sunday Million: 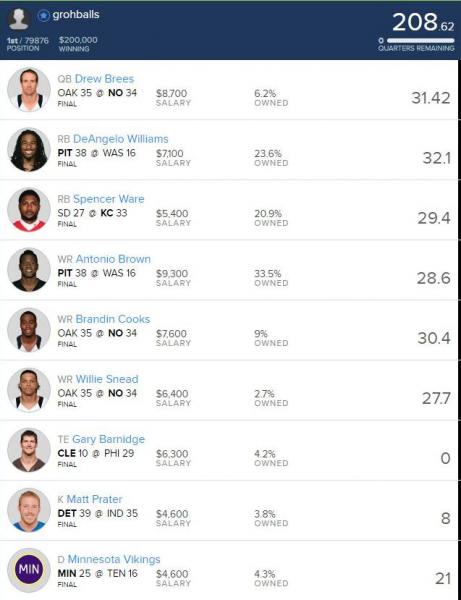 By stacking virtually the whole Saints’ passing game with Pittsburgh’s two best weapons, Grohballs locked down almost every relevant player on two teams that were in games with an over/under of 50 points or more. The “I knew it all along” effect might have everyone rushing to only roster players in games with the absolute highest projected point totals. Maybe that’s the right strategy, but maybe it isn’t -- remember that over the last 10 years, games projected in the 46-48 point range score just as many points as those in the 50+ range during the first quarter of the season. It’s easy to look at a lineup from last week and say “I could have made that! I knew it all along!”

To help avoid this, and many other, roster-building pitfalls, Chris Raybon and I have put together a set of guidelines for FanDuel GPPs. These guidelines are meant to serve as a convenient reference to use while you build your lineups.

In addition to the handy guidelines, always keep in mind the principles outlined in the Definitive Guide to Stacking on FanDuel, and you’ll be well on your way to the top of the leaderboard.

Blake Bortles $8,100 @ SD - As mentioned in the intro, I’m a huge fan of targeting games projected in the second tier of point totals early in the season -- those games often end up with as many points as the highest projected games, but you get a huge edge on the field in terms of ownership. This game fits that profile, with an over/under currently at 47 points and a spread of just three.

Last week, the Jaguars threw on just 50 percent of their red zone plays, but with virtually the same offense last season, they threw two-thirds of the time inside the 20 and scored almost 90 percent of their red zone touchdowns through the air. Facing a Chargers’ defense that allowed 0.60 fantasy points per attempt last week (bottom-10 in the league in that metric), Jacksonville will be back to their pass-happy ways.