Raybon's Review: What We Learned From Week 13 DFS on FanDuel & DraftKings 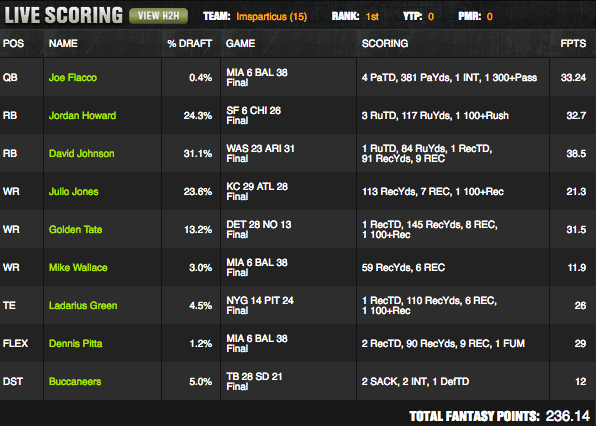 Congrats to Imspartacus, who took down the Milli' Maker with a studs-and-scrubs approach highlighted by contrarian Ravens stack. Anytime you're part of an overwhelming majority that missed on a player, I prefer to find the factors that would have led to play him, rather than focusing on debunking the myriad of reasons why you shouldn't have played him. Because humans are naturally risk-averse, it only takes one reason for most of us not to play someone, whereas the correct mindset -- at least for large-field tournaments -- should be that we only need one reason to play someone.

What could have landed you on Flacco and Pitta? 4for4's handy DraftKings GPP guidelines tell us that we should target QBs and TEs who are home favorites. 4for4's signature metric, schedule-adjusted fantasy points allowed (aFPA) could have also pointed us in the right direction: Miami came into Week 13 ranked 18th versus QBs and 24th versus TEs, while ranking sixth versus RBs. Baltimore had shown the tendency to abandon the run this season -- the team had attempted passes on a higher percentage of their plays (64.02%) than all but three teams coming in to the week.

According to 4for4's Player Targets App, no TE in the league had been targeted on a higher percentage of their snaps than Ladarius Green (26.5%) going in to Week 13. As the team had previously hinted, Green's snap rate increased -- and so did his already-astronomical target rate. He got targeted nine times on 25 snaps, good for a 31.4% rate. Like Pitta, Green was also a home favorite. aFPA also tells us that Green's matchup was a positive, as the Giants ranked 18th in TE aFPA.

Our aFPA metric wasn't done, however. It also could have told us that the Chargers were ranked 28th in DEF aFPA and therefore a prime target, despite the Bucs being a road underdog.