Playing in best-ball leagues such as those found on DRAFT requires owners to consider strategies that they may have never even thought of if they only play in a few redraft leagues each year. One of those considerations is building a player portfolio. Another is how to manage your bankroll, a concept that I will talk about in-depth here.

More DRAFT strategy articles: Building a Portfolio | What Worked in 2018

What Buy-In Level Should You Play?

Before anyone signs up for a single best-ball league on DRAFT, they should determine their overall bankroll for the season, assuming that they plan on playing relatively high volume—if you only plan on playing two or three $5 leagues, you can stop reading this and just learn the best way to build a lineup. And in all honesty, you should probably just play more $1 leagues, but I digress.

When discussing a true bankroll, that number is how much money you plan on investing in DRAFT leagues this year, not the number you have in your account right now. So if you have $50 on the site but plan to add another $50 before your final draft, bankroll calculations should be done using a starting number of $100. Anytime I’m determining a bankroll strategy, whether it be for best-ball or DFS, my goal is to maximize my upside while limiting variance. The tolerance levels of each individual are different but one of the most common bankroll errors is chasing upside and ignoring true risk of ruin—if you only have $100 to play with, signing up for two $50 leagues is a recipe for disaster. While this might seem obvious, some of the best minds in fantasy fall into this trap and even the best drafters in the world lose money, even though they are probably favorites in any random league.

A rough principle to follow is to be able to play at least 30 leagues at a single buy-in level before moving up in stakes. As mentioned in my article on building a player portfolio, the 30 mark is where any random sample should start to approach a normal distribution. For example, any random drafter has an 8.3% chance of winning a best-ball league (1 out of 12 chance). Of course, that doesn’t mean that everyone will win exactly 1 of 12 leagues, but a drafter of average skill level should expect two to three top finishes if they enter 30 leagues. The more leagues you play in, the more likely that you are to recognize your true expected returns—someone that wins 12% of their leagues over the long run can easily lose a single league but if they play in 10,000 leagues over multiple seasons, chances are that their number of top finishes will be damn close to 1200.

A final thing to consider is that once you hit 30 leagues, you shouldn’t automatically move up in stakes. You should be able to play at least 30 leagues at each buy-in level that you plan on participating in. Remember that one of our goals here is to smooth out variance. If you have $50 to play with and enter 30 $1-leagues but then two $10-leagues, you’ve put yourself at risk of breaking even, even if you are a winning player. In this scenario, you could come in first in a whopping 10 of 30 leagues for a 66.7% profit, only to see that profit disappear because of natural variance in your two $10 leagues.

One of the great features on DRAFT is the ability to play in leagues of different sizes, from 12-person leagues all the way down to 3-person leagues. While most people are accustomed to the nuances of 10- and 12-person leagues, few have played in leagues with six or fewer teams. Even if you're not keen to the subtlety of drafting in smaller leagues, there’s merit for mixing these games into your repertoire for the simple fact that you will win at a higher rate. Consider a 12-man league where a random drafter has a 25% chance of getting in the money (the top three are paid). In a $5 league, a third-place finish rewards $9, or 1.8x the buy-in. Playing in a 3-person league offers a 33% chance at a 2.7x return on your money. Of course, the bigger leagues offer more upside, but owners can use smaller leagues to smooth out their bankroll variance if they are especially risk-averse. Regardless of which league type you choose to play, it’s essential to understand the payout structure before entering. By diversifying your league types, you can fully take advantage of the opportunity to maximize upside while limiting variance. Remember the 30 rule.

For those who actually have played a fair amount of volume in the past and have some data on their win rates across various games, they can take a more mathematical approach to game selection. I had our resident data scientist, Kevin Zatlokal, run some simulations on the games currently being offered at the $5 level on DRAFT and here’s what he found:

Let’s take a look at this graphically. 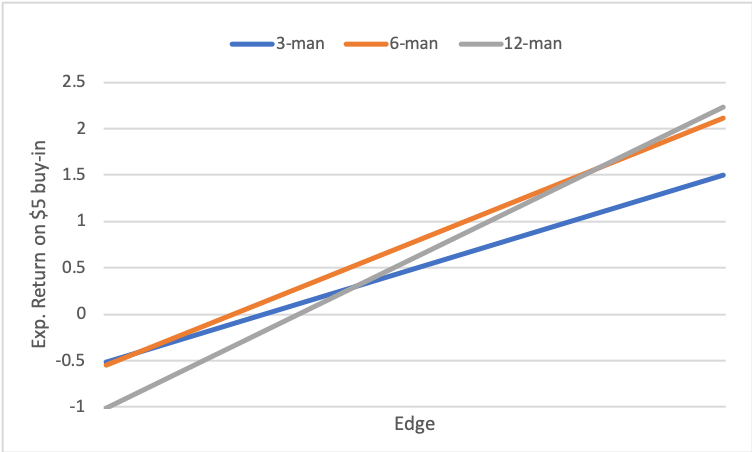 Owners who plan on playing a high number of best-ball leagues should make one of their primary focuses bankroll management. By laying out a plan for which league types you will enter as well as how much money you invest in each league, you can recognize your true expected return while maximizing upside with limited variance. Those who do have significant past data can find an optimal equilibrium for game selection, but sample size concerns for most players will certainly come into play when looking at their historical win rates, especially for smaller games which have not been around for more than a couple seasons.

Best Ball
What Worked in DRAFT Best-Ball Leagues for 2018

Best Ball
A Look at Best-Ball Tandem Backfields for 2019