DFS Playbook Strategy: How to Pick a Tight End

If you're not exploiting the tight end slot, you're not maximizing your profits in DFS. The position's low salaries and inherent volatility can be used to your advantage.

This article will show you how to pick the best tight end in DFS, and just as importantly, how to use the position to get the most out of the rest of your lineup. You'll learn how to exploit the position's surprisingly predictable TD-scoring pattern, minimize busts, and pinpoint tight ends that have a realistic show at one of the two paths to being a tournament-winner.

After making the assertion that he was the NFL's best tight end—which felt like nothing more than an alley-oop to snark-ready pundits at the time—Kyle Rudolph seemingly backed up his claim by posting a top-five fantasy season at the position. Actually, "backed into it" is more appropriate, as he rode a bevy of dump-offs from check-down chairman Sam Bradford to 8.3 targets per game, which led a position that saw only five other players crack even 7.0 targets per game. Rudolph wasn't bad by any means, but he wasn't exactly amazing, either, finishing just 13th in PPR points per snap and 30th in tight end DVOA. Rudolph's tale epitomizes a basic truth in fantasy football: Volume trumps efficiency at positions where volume is scarce.

Despite not being nearly as predictive on the single-game level as it is from one season to the next, a tight end’s averages in box score volume stats—targets, receptions, and yards—remain the predominant means to project his upcoming fantasy production.

Data from all top-30 TEs in 2014–16. Correlation is weighted to account for the greater amount of samples available for one game than 15 games, etc., in a given season.

In terms of a tight end’s season averages over his past three games or fewer, targets tend to be the most predictive category of upcoming-game fantasy points. But as the sample size grows, receptions, yards, and even fantasy point average itself start to become equally as predictive, with only regression-prone TD output and efficiency stats that don't account for volume lagging behind.

Targets, however, maintain an edge over the other stat categories when it comes to using season-to-date average to predict upcoming-game output in that same category, and thus it makes sense to treat them as the predominant gauge of a tight end's upcoming fantasy production.

Data from all top-30 TEs in 2014–16. Correlation is weighted to account for the greater amount of samples available for one game than for 15 games, etc., in a given season.

As opposed to in-line tight ends, who run most of their routes from the edge of the offensive line, athletic "move," or joker, tight ends can run routes from the slot or split out wide. Naturally, these athletic receiving tight ends will tend to carry the most fantasy upside, and thus be the most likely players at their position to overcome lack of opportunity with sheer efficiency. Jordan Reed and Travis Kelce, for instance, finished No. 1 and No. 2 in fantasy points per game on both major DFS sites despite ranking fifth and sixth in targets per game, respectively. And of course there's Rob Gronkowski, who managed third- and eighth-place finishes in points per game on FanDuel and DraftKings, respectively, despite (somehow) ending up just 23rd in targets per game (4.8).

Nevertheless, only 10 tight ends in 2016 averaged more than six targets per game while 12 remained stuck in the 5-to-6-target-per-game purgatory, so any signal of a spike beyond the doldrums of a handful of targets is noteworthy, even for an in-line type. For instance, Rudolph and Dennis Pitta, who both finished as a top-five point per dollar plays on DraftKings and FanDuel last season, were already both averaging 8.0 targets per game after Week 2 in a sign of things to come.

2. Project a Bump for Tight Ends at Home or on Favorites

The goal in DFS is to marry opportunity with strong performance. One of the reasons why a tight end's in-season TD average is not as predictive as volume of upcoming-game fantasy points is that tight ends will tend to score most of their TD in specific circumstances, namely when playing at home or while their team is the favorite.

Since an average of just 1.2 tight ends per week over the past four seasons have posted multi-TD games, the position’s TD potential can essentially be treated as a binary outcome most of the time: zero TDs or one TD. If a tight end is not at home, on a team that's the favorite, or both, that outcome is more than likely going to be zero TDs.

The tight end position is volatile: the average top-20 fantasy TE will see his weekly fantasy point totals land 70% above or below his seasonal fantasy point per game average, a rate which is double that of QB and 10-20 percentage points higher than that of RB and WR. Failing to take this volatility into account could lead to overspending on the position in cash games in pursuit of illusory consistency, so it's not a good move to uniformly target a linear multiplier at every position (e.g., 3x on DraftKings/2x on FanDuel) that doesn't account for positional- and salary-based expectation. We can find out how many points are actually realistic for a tight end in cash games by using a formula derived from a regression analysis on the relationship between position, salary, and scoring:

For example, Tyler Eifert’s $6,000 salary on DraftKings in Week 14 last season would mean adding 7.8 to the starting-point floor of 8.1, for a cash game target score of 15.9 (2.65x), which is very different from the scoring expectation of a player with the same salary at each of the other positions:

At higher salaries, the TE slot can't be expected to provide as much value as other positions; at lower salaries, a bust from the TE slot will have less of a negative impact than it would have at other positions. This often makes at the ideal position to punt. Taking a zero from a minimum-priced TE on FanDuel, for instance, would in theory set your lineup back 8.8 points, while taking a zero at RB or WR would cost over 11 points.

1. Account for Volatility by Spending as Little as Possible

Since tight ends are relatively low-scoring and inexpensive in DFS, the TE slot can act as the linchpin of your DFS lineup; you can fearlessly slot in a cheap option that allows you to fit higher salaries elsewhere without giving up an edge.

A salary anywhere in $4,000s has been a sweet spot for the cash game consistency of TEs on DraftKings. In that range, they've edged RBs and WRs in consistency rate, as well as other TEs with lower salaries. TEs in the $3,000s, however, have also tended to fare better than RBs and WRs in the same salary range.

Uneven performance of the small sample of expensive TEs notwithstanding, the numbers imply a relative advantage to deploying a TE priced anywhere from $3,000–$4,900, of which there have been an average of 13.9 instances per week available over the past two seasons (that hit the 7.5-point projection cut-off). Depending on salary, these TEs will need between 12 and 15 points to hit value, making any TE that can project for that scoring range's historical average of 7.1 targets and 4.9 receptions an option.

Given the lack of a drop-off in consistency all the way down to the lowest price point, the TE slot is, as was mentioned, best served as the default punt position when contemplating FanDuel cash game lineup construction. Tight ends priced $5,000 and under will need between 8.8 and 9.6 points to hit value, putting into consideration any tight end that can realistically hit that scoring range's historical average requirement of 7.0 targets and 4.8 catches.

Despite home-field advantage being built into Vegas odds, a four-year sample suggests that for tight ends, DFS salary algorithms weight Vegas odds overall considerably more than they weight where the game is being played, which has led to a sizeable consistency advantage on both sites for tight ends playing at home. 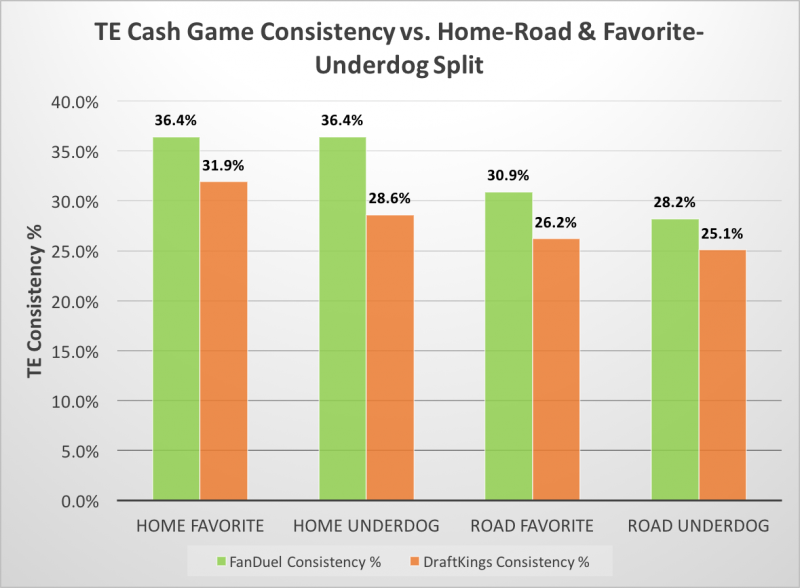 Until/unless DFS sites suddenly change course with their pricing algorithms, choosing a tight end that's playing in his own building will be a sharp way to maximize the floor of the TE slot in a cash game lineup.

2 Paths to Picking a Tight End That Wins GPP Tournaments

Note: Data in this section was compiled from first-place lineups in the 2015-16 DraftKings Millionaire Maker and FanDuel Sunday Million guaranteed prize pool tournaments.

First-place lineups haven't utilized a particularly tactical approach to the TE position. The average salary allocation and ownership is what you'd expect, and only a modest 22% of Millionaire Maker and 15% of Sunday Million lineups had a QB-TE stack. So what did the first-place lineups do to win? Simply nail one of the two or three highest-scoring TEs of the week.

Over the last four seasons, roughly 1.5 tight ends per week have posted a 100-yard game. Since 100-yard games historically take an average of 10.1 targets at the position, they tend to be produced mostly by the league's premier tight ends. As such, these TEs are liable to carry relatively high salaries and ownership percentages (and if 2016 is any indication, they also tend to be named Travis Kelce).

Potential producers of 100-yard games at the tight end position are best identified by obvious factors, namely previous track record. In each of the past four seasons, roughly a half-dozen tight ends have posted multiple 100-yard games, and those repeat performers combine to account for about two-thirds of all 100-yard games in each respective season. And in what should not be a surprise by now, a whopping 50% of all 100-yard games by a tight end during that span have come while his team is a home favorite.

As mentioned, roughly 1.2 multi-TD games per week have been recorded by tight ends over the last four years. Relative to 100-yard games, however, multi-TD games have been less predictable—just 23% of tight ends to post multiple TDs have done so more than once in the same season. However, this unpredictability provides a chance to exploit variance, as compared to a 100-yard game, a multi-TD game costs on average of $500 less.

Despite being unpredictable relative to 100-yard games, multi-TD games still tend to come under predictable circumstances in the form of playing for the favorite, especially at home.

Another identifiable trait for a tight end with decent odds of hitting the paint twice is him being among his team’s most frequent targets in the red zone. Sometimes a tight end who is normally his team's third or fourth option overall will get bumped up in the red zone a couple of notches. Dwayne Allen and Jack Doyle, for instance, both posted multi-TD games for the Colts in 2016 while each commanding the same percentage of red zone targets as top option T.Y. Hilton, whose diminutive stature prevents him from being as much of a threat in close as he is between the 20s.