DFS Playbook Strategy: How to Pick a Kicker

“Picking a kicker is all luck" is something you hear less and less nowadays, and rightfully so; kicker scoring more or less follows a predictable pattern. It all comes down to using the Vegas lines, which have strong trends relative to kicker scoring that can be used to accurately project kickers and identify those with the highest cash game floors and tournament ceilings. 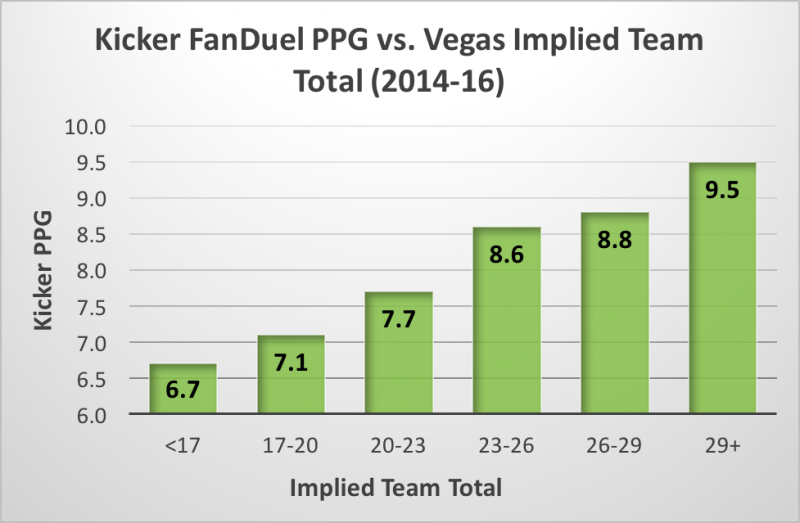 Game script plays an important role in determining how many field goal opportunities a kicker will receive. The average NFL team kicks a field goal on 75% of fourth downs inside the opponent’s 35-yard line when leading or tied, but on only 60% of fourth downs when trailing. The Vegas odds capture this well: over the past three seasons, kickers on the favorite have collectively outscored kickers on the underdog by 12%. 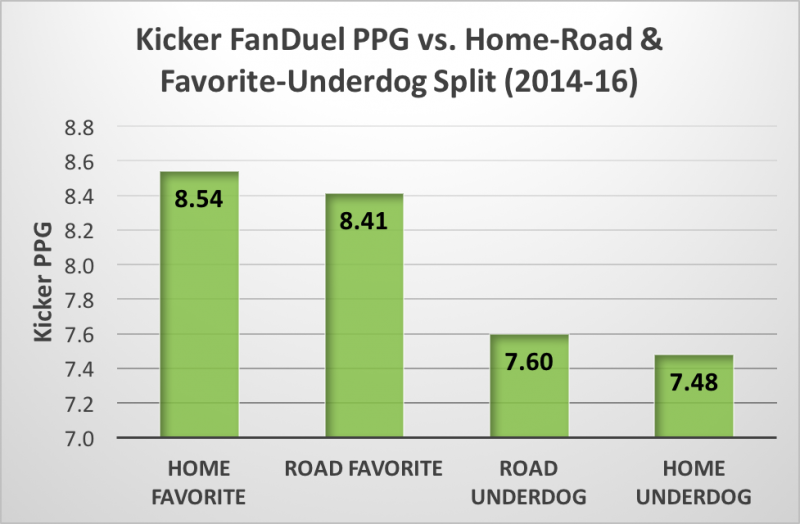 Over 75% of available kickers on FanDuel each week will tend to be priced in a $500 window between $4,500 and $4,900, so even though favorites' one-point advantage may seem small, it's critical differentiator in such tight salary quarters.

Like every other fantasy position on FanDuel, kickers have a unique scoring and consistency profile that differs by salary range and relative to other positions. Targeting a linear value multiplier, such as 3x for 150 DraftKings points or 2x for 120 FanDuel points, doesn't take this into account, so I ran a regression analysis on fantasy scoring relative to position and salary to derive a formula that calculates a score and multiplier to target in cash games:

For example, in Week 16 of 2016, a $5,300 Justin Tucker would have needed 1.89x (10.0 points) to hit value, while a $4,500 Jason Myers would have needed a higher multiplier, 2.10x (9.4 points) to hit value. And the expectations for each of the aforementioned kickers would differ from that of a defense/special teams with the same respective salary:

One similarity between kickers and defense/special teams is that the middle salary ranges have proven the most fruitful:

The $4,800–$5,300 range has been the sweet spot for peak kicker consistency. Defense/special teams also peak in that range, however, so both positions would by default take equal priority in terms of salary cap allocation. That said, there's usually a greater amount of available options at D/ST options at lower salary ranges than kicker because of the former's lower minimum salary.

Why have kickers in the middle-to-upper salary tier been so consistent? Kicker consistency tends to hold steady for Vegas implied point totals anywhere from 23 to 29 points, which comprise nearly half of all NFL games and a majority of kicker salaries. 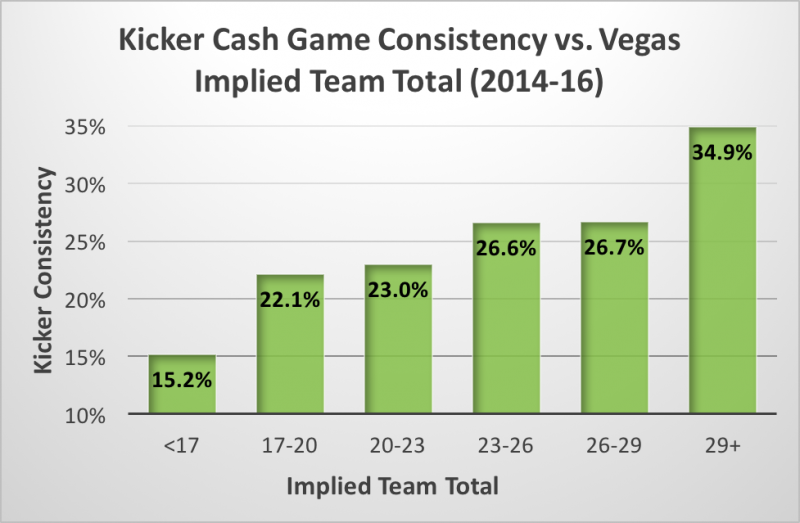 As long as underdogs and low implied totals are avoided, paying as little as you need to at kicker makes for a sound cash game strategy. There will usually be at least one kicker on the lower end of the salary spectrum that is kicking under ideal circumstances in a given week.

Being in positive game script is ideal for a kicker and translates to higher cash game consistency rates for favorites after accounting for salary differences: 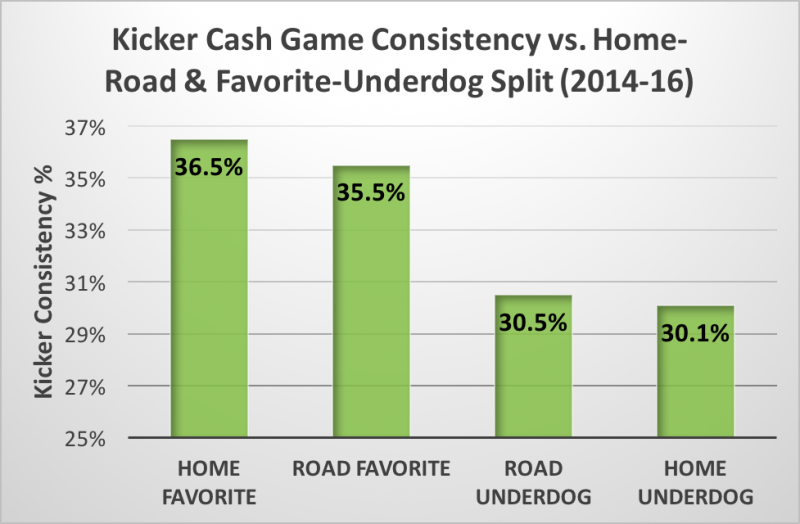 Kickers on favorites have collectively hit cash game value at a rate 6 percentage points greater than kickers on underdogs. As with QB, RB, and D/ST, kicker is a position where you almost never want an underdog in your cash game lineup.

3 Strategies for Picking a Kicker that Wins GPP Tournaments

Note: Data in this section was compiled from first-place lineups in the FanDuel Sunday Million tournament during 2015 and 2016.

As with in many traditional fantasy leagues, kicker has been the black sheep of first-place lineups in the Sunday Million, posting a lineup-low 12.7 points per game average, which is nearly six points less than D/ST (18.4).

1. Balance Upside with Cost by Limiting the Use of Kickers in Either Salary Extreme

While kickers on teams with merely above-average implied point totals in a given week will tend to suffice in cash games, higher implied totals make more of a difference when it comes to tournament upside. The average kicker on a team with an implied total of 29+ has double the odds of scoring 15+ points as kickers collectively in the 20–26 range:

Kickers do not have as much top-end upside as other positions (including D/ST), though, so first-place lineups have been forgoing some upside at the position and choosing cost-effective options instead. 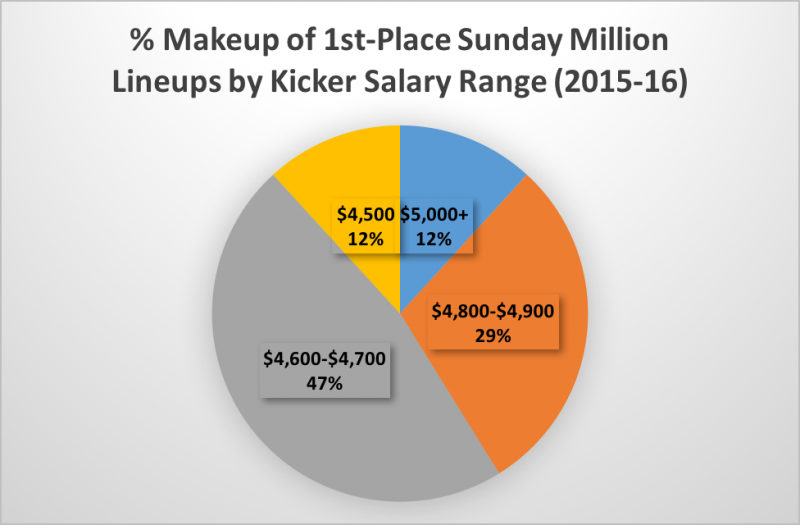 Do these numbers mean you should always take a kicker priced $4,600 or $4,700? Of course not. But you should be willing to sacrifice some overall upside to save cap space in tournaments because kicker is a low-ceiling position.

But it's not just shying away from the upper limits of salary that's a sound proposition; the $4,500 minimum should be mostly eschewed as well. Of the 181 instances of a minimum-priced kicker last season, 70% were either on an underdog, a team with an implied point total below 23, or both.

Forty-four percent of kickers in the first-place Sunday Million lineups had ownership under 6% while only 13% had ownership of 15% or higher. The relative disadvantage of using kickers at either salary extreme explains their low ownership in the average first-place lineup: the field tends to disproportionately own the top high-priced and low-priced option at kicker each week, neglecting the valuable low-to-middle salary range. Using the Vegas odds to pinpoint kickers with decent upside in that range is a good way to differentiate your lineup.

Another good way to differentiate your lineup is by taking advantage of the positive correlation between a kicker and his teammates. Just under half of all first-place lineups paired a kicker with another member of the same team and every position was represented. Sometimes a kicker will get unlucky when his team scores only TDs, but in general, the offenses that score the most points in a given week will tend to score the most TDs and field goals.

While kickers are positively correlated with all of their offensive teammates, their correlation to defense/special teams is even stronger. In fact, the only positional pairing with a stronger correlation on FanDuel than K-D/ST (.29) is QB-WR1 (.33). To see this strategy in practice, look no further than Week 9 of 2015 when FanDuel user rtoraine got 30 points combined out of a Josh Brown-Giants stack with 5.4% combined ownership.