DFS Playbook Strategy: How to Pick a Defense/Special Teams

If you treat the D/ST slot as an afterthought, you're giving away money in daily fantasy football. So with all due apologies to any DFS philanthropists out there, this article will show you how to make profitable decisions at the D/ST slot.

We'll begin with the key to making accurate projections for D/ST, then go into proven ways to maximize the rate at which your D/ST provides value relative to its salary, and conclude by revealing which strategies first-place winners are using at D/ST to take down the biggest guaranteed prize pool tournaments.

Despite being largely determined by relatively rare, difficult-to-predict events such as turnovers and return TDs, and thus being subjected to the largest weekly fluctuations of any fantasy position, D/ST scoring tends to follow a predictable pattern: The better the Vegas odds, the more fantasy points a D/ST will score.

The D/ST of Vegas favorites have historically outscored those of Vegas underdogs by about 33%. Looking at whether a team is the favorite or the underdog is useful not only for predicting erratic events like return TDs, but even the rare instances of a shutout—the favorite has accounted for eight of the 12 shutouts over the past three seasons.

Favorites on the road edge those at home in most categories because road favorites tend to be the highest-quality teams in a league where roughly just one-third of teams playing on the road will be viewed the favorite in a given game.

Of course, that makes the inverse true as well. The vaunted Broncos defense finished third overall in DraftKings scoring (9.7 points per game), but most of their damage was done while playing as the favorite, where in nine games they averaged a league-best 12.9 points per game. In seven games as the underdog, the Broncos morphed into a below-average 5.6-point-per-game unit.

Why are favorite-underdog splits so stark in regards to D/ST fantasy scoring? Because how likely a team is to win or lose a given game indirectly serves as a predictor of opposing passing play volume (the league average offense throws 33% more when playing from behind). Facing a high amount of passing plays is crucial to a defense because it is on those plays that all interceptions, sacks, and roughly 60% of fumbles—as well as any resulting TDs from those plays—occur, which is why there is a positive correlation between opposing passing play volume and D/ST fantasy scoring.1

As you might imagine, the less points the Vegas odds imply a team will allow, the better it is for the fantasy outlook of its D/ST:

Since implied team total reflects how well or poorly an offense is expected to play, it also essentially backs into capturing in one number the likelihood of sacks, interceptions, and fumbles, which are all difficult to predict on their own because past performance offers negligible short-term predictive value.2 (The over/under is simply a means to arrive at implied total and is of little predictive value when taken on its own.)

D/ST tends to be the most volatile fantasy position, and because the common practice of targeting a uniform linear value multiplier—3x for 150 DraftKings points or 2x for 120 FanDuel points, for example—at all positions fails to account for this volatility, it can lead to suboptimal lineup construction. I've derived a formula that calculates how many points to target from a D/ST using a series of regressions that explain the relationship between position, salary, and scoring expectation:

One of the most important things that the cash game target scores can tell us is that even if we are targeting 150 total DraftKings points, for instance, a $2,000 punt D/ST like the Falcons in Week 11 of 2016 would have needed to score 2.15 points per $1,000 on top of a starting-point floor of 3.6 points, for a total of 7.9 points, or 3.95x—than than 3x.3 Interestingly, D/ST on FanDuel is the only position where the necessary value multiplier increases (albeit slightly) as salary goes up (which is indicated by the formula's negative slope).

Because these illuminating cash game target scores are adjusted for positional- and salary-based expectation, they can be used to reveal the sharpest lineup construction tactics for the D/ST slot, which can be done by comparing the consistency rates of D/ST in various splits and salary ranges.

As fun as one might be to root for in real life, an underdog should almost never find its way into a cash game lineup in DFS: 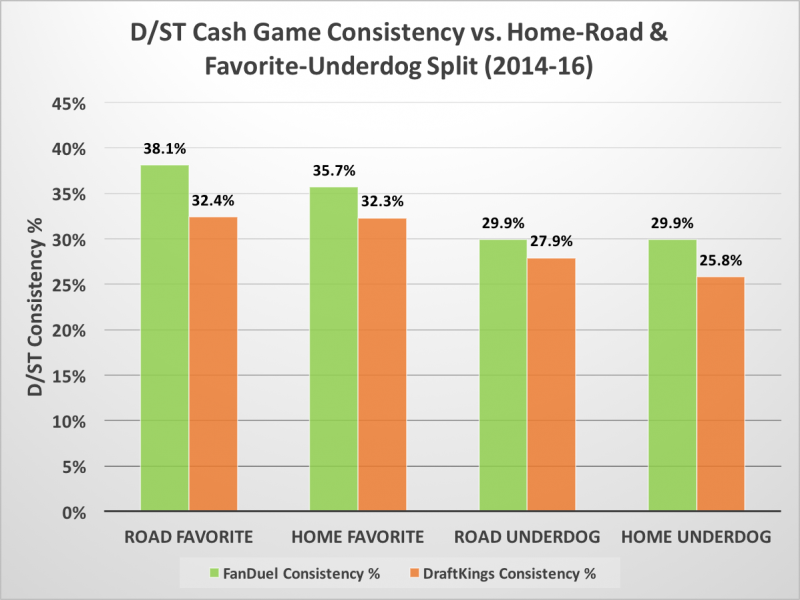 Interestingly, FanDuel seems to be overcompensating for home field advantage somewhat, which has made road favorites the most consistent cash game plays on the site.

Perhaps realizing that punting with a sub-$2,200 option was working a little too well in 2015, DraftKings priced a D/ST in that range only 14 times in 2016, compared to 45 the year before. Assuming the site continues that trend, the sweet spot for cash value from a D/ST looks to be in the $3,100–$3,300 range. Paying up beyond that into the upper $3,000s has offered uneven results, while dropping down below it to the mid-$2,000s has been trap-play territory.

Data does not include TEs projected for below 7.5 points in a given week by 4for4.

The fact that D/ST consistency peaks in the middle of the position's salary range makes sense, as it is in that range where you will tend to be able to find a solid defense with favorable Vegas odds. Meanwhile, a large portion of the sample suggests there is a sharp decline in consistency as salary dips from the low $3,000s into the mid-$2,000s. This also intuitively makes sense because those are the ranges in which underdogs most often tend to reside.

Like those on DraftKings, D/ST on FanDuel have also hit peak consistency in the middle of their salary range, although on FanDuel it has been a bit more toward the higher end of the middle range, or right around the $5,000 mark. There has been a clear sweet spot for consistency rate in the upper-$4,000s-to-mid-$5,000s:

The D/ST position has generally hit peak consistency in the same salary range as kicker, which suggests employing a best of both worlds strategy of sorts, where you try and secure a D/ST and a kicker both priced in the upper-$4,000s. However, the drop-off from peak to floor in consistency rate has been steeper at kicker than at D/ST, so if forced to choose, bumping down in salary at D/ST will tend to be the smarter option.

Looking to optimize your cash game lineups by projected floor and expert picks/analysis?Subscribe to 4for4 now!

Note: Data in this section was compiled from first-place lineups in the 2015–2016 DraftKings Millionaire Maker and FanDuel Sunday Million guaranteed prize pool tournaments.

Perhaps due to the higher salary floor on FanDuel, first-place lineups of the big GPP on that site have needed to nail their D/ST pick more so than those on DraftKings. While the D/ST slot in the DraftKings Millionaire Maker lineups averages by far the fewest points (15.2) of all slots in the lineup, the D/ST slot in the FanDuel Sunday Million lineups (18.4) has been on par with TE (18.4) and way ahead of kicker (12.7).

A deeper dive into the data reveals three key strategies the first-place lineups are using at the D/ST slot in order to take down tournaments.

In what should be a familiar trend by now, D/ST that are favorites have accounted for roughly two-thirds of all big fantasy games at the position despite making up just half of all NFL games: 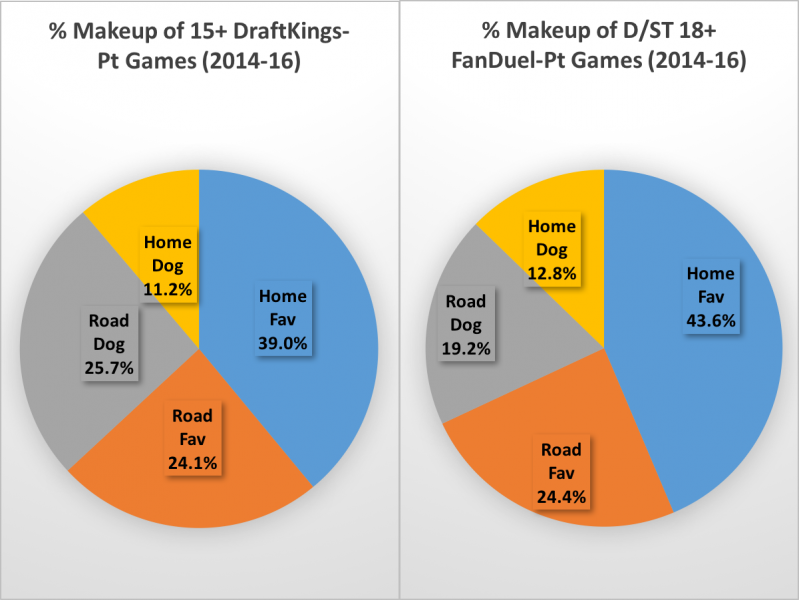 Underdogs have been more viable on DraftKings because first place hasn't required as high of a score from the D/ST there as it has on FanDuel. And whereas favorites on the road have been the most consistent cash game performers on FanDuel, favorites at home have had slightly more overall tournament upside.

Mirroring the most effective cash game strategy for the most part, first-place lineups in the large GPP tournaments mostly stuck to the middle salary tiers at the D/ST slot:

(The first-place lineups that didn't go with a mid-tier option in the D/ST slot tended to pay up at a higher rate than they punted.)

Despite it being somewhat obscured by the position's ownership averages overall, the first-place lineups have been frequently using a low-owned D/ST (which is of course much easier to do when there is only one slot to fill). The D/ST in a first-place lineup had less than 6% ownership half of the time on FanDuel lineups, as well as roughly one-third of the time on DraftKings.

How do you go about finding the best contrarian plays for the D/ST slot? You can look toward the following:

Pairing D/ST with RB or kicker works especially well because all three of those positions have proven to have a heightened chance of success when their team is playing with favorable Vegas odds.

Looking to optimize your tournament lineups by projected ceiling or expert picks/analysis?Subscribe to 4for4 now!

2. Using a weighted correlation from all possible sample sizes (1-15 games) in 2016, the highest correlation in the season average of stat category that affects D/ST to it's result in the next game was .123 for points allowed. (back)