At the core of the notion to get rid of kickers is the myth that their output is totally random and unpredictable. Sure, there are some who got blasted by a 25-point performance from Stephen Gostkowski in Week 3 last year or rode Tyler Bass' 20-point leg to victory in Week 6. When those weeks happen, it’s easy to blame it all on the “randomness” of the kicker spot, but very few take the time to research and see that it may not be so capricious at all.

This piece will break down the best way to tackle the kicker position divided by fantasy formats. FFPC still has the stones to use kickers in their best-ball leagues and of course, there are plenty of redraft and seasonal leagues out there that are pro-kicker.

We don’t look to predict individual kicker components like field goal attempts, extra-point tries or kick distances, as that would be somewhat futile. Instead, we turn to Las Vegas for kicker love in the form of implied team totals. The more points a team puts on the board, the more their kicker scores. 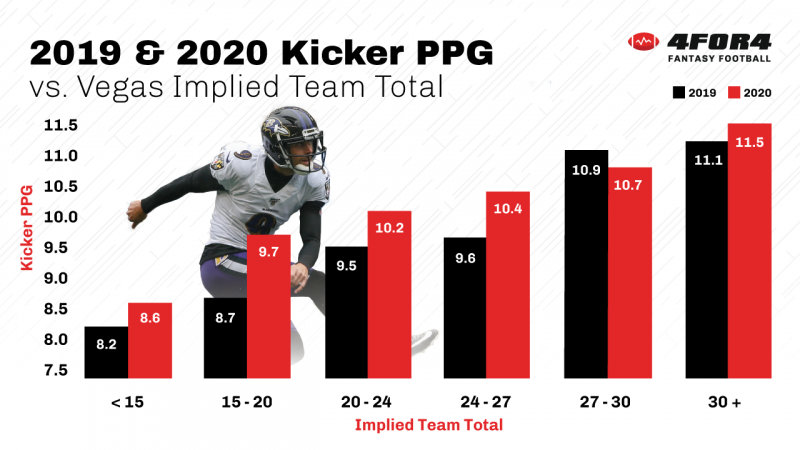 As you can see from the past two seasons, the correlation between higher implied team totals and larger kicker output is solid. As I dug even deeper into this data, I found that the number of times a kicker scored 10+ fantasy points when their team’s implied total was 27 or higher was more than double the amount of when their predicted score was 26 or less.

First and foremost, wait to draft your kicker until the final round of the draft. With every pick in a fantasy football draft, there is an opportunity cost associated with that pick. In fantasy terms, opportunity cost is simply the value of players that you don’t draft, but you had the chance to take. Selecting a kicker before the last round, whether you are in a 16, 18- or more-round draft, has a potentially large opportunity cost attached to it.

A look at players drafted in Rounds 12 - undrafted in 12-team redraft leagues on MFL last season reveals a decent group of positional players who produced starting numbers and even a few potential league winners. Drafting a kicker before their time could mean missing out on those points throughout the season, so as hard as it may be—and whatever FOMO you may be experiencing—tap the brakes on that kicker before the final round.

If we look at last year’s top 10 legs, six of them came from offenses among the top 10 in total passing yards, with a few landing outside.

In 2019, two of the top three kickers were among the top three offenses in the NFL in third-down efficiency. The Chiefs led the league at 47.6% on third downs, which allowed Harrison Butker to kick his way to the most fantasy points, while Baltimore ended second with 47.1% efficiency on the third down, earning Justin Tucker the K3 spot overall. Sandwiched between them was Wil Lutz, whose offense was a respectable 10th in this category with a 42.2% third-down efficiency.

Last year, three of the seven highest-scoring fantasy kickers were from the offenses in the top eight in third-down efficiency. The Falcons were third in the league in third-down efficiency at 43.9%, which led to a K1 performance from Younghoe Koo, while Tampa Bay and Dallas ended fourth and eighth with 43.5% and 40.5% respectively, earning Ryan Succop K7 and Greg Zuerlein K6 spots in total fantasy points.

In 2020, only 22% of winning teams drafted their first kicker by the 16th round, while that number jumped to 65.7% between Rounds 18 and 19 combined. One change from 2019 to 2020 was that builds featuring three kickers dominated win rates, as only one type of roster among the 12 highest scoring builds boasted just two kickers, with 11-of-12 constructed using a trio of placekickers.

Kicker-hate is at an all-time high and before you let those carpet cleaners in your house and join the cult, you may want to consider how helpful they can be to your team’s overall output.

Sure, we’ve all be burned by the kicker position in the past and on the surface it all seems super random, but by putting in some time and effort, kicker’s production from week to week may not be as arbitrary as it appears.

Looking at Vegas odds, teams’ offensive efficiency and volume can also assist you in getting the most from your kicker regardless of fantasy format.

Let your league mates draft their kicker(s) way too early, while you sit back armed with some actionable data to steer you towards the right one.